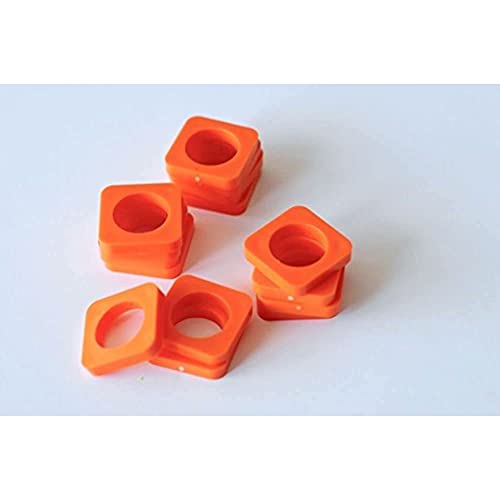 20 Numicon 1-shapes, useful for activities or to replace lost shapes. Not suitable for children under 36 months due to small parts.

After graduating in Education and Mathematics at the University of London Institute of Education, Tony Wing taught for a number of years as a primary school teacher and as a school subject leader for mathematics. Always enjoying mathematics teaching in particular, in 1974 he became a Lecturer
in Mathematics and Education at Brighton College of Education, specialising in early years mathematics, and there began to develop his approaches to teacher training. He was promoted to Senior Lecturer in Mathematics Education at Brighton Polytechnic (now the University of Brighton) Faculty of
Education in 1980, and began researching for his PhD part-time at the University of Southampton School of Education. In 1985 he became an active member of the Association of Teachers of Mathematics (ATM), participating in several working groups and being elected to the ATM General Council (1987-91).
He was co-founder, and chair of the Sussex branch of ATM between 1994-8. Between 1987 and 1997 he also undertook a variety of consultancy appointments and was external examiner for primary mathematics education courses at both Brunel and Nottingham Trent universities. His PhD (researching
representation in mathematics) was awarded in 1989. Between 1997 and 2005, he was instrumental in leading the University of Brighton School of Education to the achievement of the highest Ofsted grades for mathematics initial teacher training, thereby gaining Brighton University national recognition
as a 'Category A' provider of ITT. Always keen to try out theoretical teaching ideas first in classrooms, Tony was delighted in 1995 to be able to begin developing in schools the teaching approaches that now underlie the Numicon programme. Together with Romey Tacon he was granted two consecutive
Teacher Training Agency (now TDA) Teacher Research awards to research and develop approaches to mental arithmetic teaching in infant schools, and the tested outcomes of this research now form the basis of the Numicon Foundation Kit, and Numicon Kits 1 and 2. In 2006 Tony took early retirement from
the University of Brighton in order to devote his time more fully to the further development of Numicon in practice.

Romey Tacon graduated in 1982, having studied Art in Education as her main subject. She went on to teach in five schools and developed a keen interest in teaching mathematics to young children, seeing how children's fascination with patterns in creative work readily connected with their fascination
with patterns in mathematics. During her teaching career at various times she was subject leader for art, science, mathematics and was also a Special Needs Co-ordinator for two years. Romey has always been committed to teaching in ways that focus on the learner and has consistently advocated a
practical approach to teaching maths using structured apparatus. Following her involvement in the TTA research project into effectively teaching infants mental arithmetic, she became a Leading Maths Teacher in East Sussex. For nine years she led a successful infant school and nursery in East Sussex,
the school was rated by Ofsted to be very good in 1996 and again in 2007 when no key issues were identified. In 2000 through involvement in a PFI project the school developed a Special Needs Facility on an innovative in-reach/out-reach model which served children with speech, language and
communication difficulties from a cluster of schools. Romey took early retirement from school in 2004 to concentrate on her work with Numicon and to teach part time for a year at Brighton University. She works principally on the further development of Numicon teaching materials and Numicon
professional development.

Jayne Campling graduated from Brighton University (UK) in 1995 with first class honours. Her dissertation initiated a keen interest in children's visual concepts of maths, which led to involvement with the original Numicon research project (1996-1999). Maintaining links with Numicon, she became a
Lead Maths Teacher. Further promotions to Maths Subject Leader and Assistant Headteacher enabled her to implement a multi-sensory approach to maths teaching across a large primary school. A secondment to teach maths education at Brighton University and continued Numicon consultancy work inspired
Jayne's involvement in the future development of the Numicon Project, as Resource Development Leader.

Ruth Atkinson qualified as a teacher from Eastbourne College of Education in 1974. During her teaching career she has been a Special Needs Support Teacher and also a Special Needs Co-ordinator. She has always advocated a practical approach to maths teaching that builds on what children already
understand and she was Curriculum Leader for Mathematics for ten years at an Infant school and nursery in East Sussex, where she worked to achieve a coherent and consistent approach to mathematics teaching throughout the school. During the initial TTA Numicon research project into effectively
teaching infants mental arithmetic, Ruth was actively involved in developing and testing the teaching activities. Following the project she became a Leading Maths Teacher in East Sussex. Ruth took early retirement in 2004 in order to concentrate on developing the Numicon teaching materials and
training. She continues with work on Numicon and delivers training for Local Authorities and for Numicon Professional Development Consultants.