Items related to A Tramp Abroad (The Oxford Mark Twain) 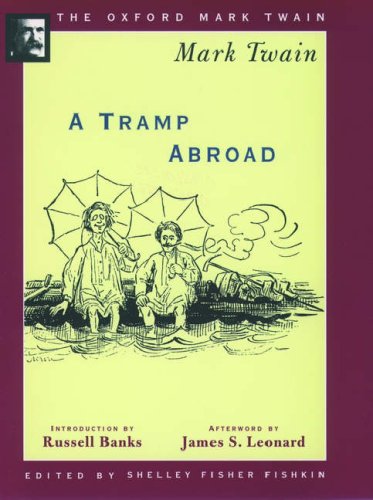 A tongue-in-cheek travelogue following in the tradition of the immensely popular Innocents Abroad in which Twain and his mysterious travelling companion Mr. Harris make their way through Germany and across the Alps into Italy.

"["A Tramp Abroad] is delicious, whether you open it at the sojourn in Heidelberg, or the voyage down the Neckar on a raft, or mountaineering in Switzerland, or the excursion beyond the Alps into Italy." --William Dean Howells

Mark Twain, whose real name is Samuel Langhorne Clemens, born November 30, 1835 in Florida, Missouri, United States, and died April 21, 1910 in Redding, Connecticut, is a writer, And American humorist. After a career as a military officer, a printer and a journalist with miners in Nevada, he became known through his novel The Adventures of Tom Sawyer (1876) and his sequel, The Adventures of Huckleberry Finn (1885). A child of the Border Mark Twain comes from a long-established family on the American continent, whose trajectory has married the pioneer front drawn by settlers. Twain's childhood environment is therefore the world of the American "Border". However, the Clemens family, like Twain himself when he reached adulthood, did not count among the adventurers and clearing people who had set out in the vanguard of the colonization movement towards the West. It slipped into the wake of this vast population movement and settled on land already worked by settlers where social life is already relatively stable. His mother, Jane Lampton, was born in Kentucky in a family that is probably one of the first generations of pioneers to cross the Appalachian Mountains; The family legend lends him a distant ancestry with the Lampton, dukes of Durham. The paternal branch of the family is native to the South of the country. His grandfather, a farmer in Virginia, migrated to Kentucky in the early 19th century to become a commissioner of revenue. Twain's father, John Marshall Clemens, studied law in the East and returned to Adair County (Kentucky) where he married Jane Lampton in 1823. He served as an attorney and ran his life After fortune. His quest takes him successively to Tennessee, Gainesboro and then to Jamestown in Fentress County, Tennessee where he invests his savings in 75,000 acres of land. The small number of cases of justice to treat pushes it to the reconversion: it becomes a merchant, opening a store of general supply, typical of the border. He tries his luck in several localities of Tennessee and then joins John Adams Quarles, his wife's brother-in-law, in Missouri on the advice of the latter. The village of Florida (Monroe County) in which the family settles is the scene of the birth of Samuel Langhorn Clemens, the fifth child of the family.