Items related to The Vatican and Zionism: Conflict in the Holy Land,...

Minerbi, Sergio I. The Vatican and Zionism: Conflict in the Holy Land, 1895-1925 (Studies in Jewish History)

The Vatican and Zionism: Conflict in the Holy Land, 1895-1925 (Studies in Jewish History) 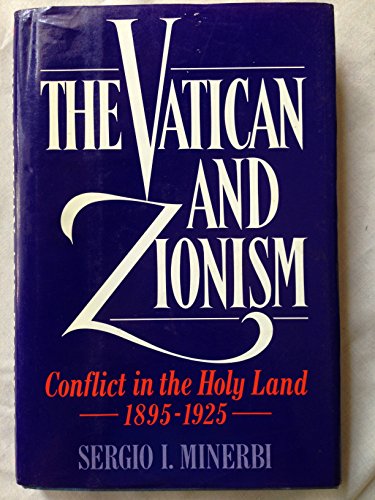 It seems odd that today, as the nations of Eastern Europe restore diplomatic ties to Israel, the Vatican still refuses to have normal relations with it. But, as Sergio Minerbi writes in this fascinating account, the Papacy has been consistently hostile to Zionism since before the First World War.
Drawing on many unpublished documents from diplomatic archives, Minerbi brings to light the little-known role of the Vatican in relation both to the Great Powers and the Zionists in the early years of the twentieth century. Engaged in a complex balancing act involving the Ottoman rulers of Palestine, rival Christian churches (both Eastern Orthodox and Protestant), and the conflicting claims of Catholic countries with regard to the Protectorate over the Holy Places, the Vatican looked with dismay on the possibility of a Protestant British mandate--especially after the 1917 Balfour Declaration, which declared Whitehall's sympathy with Zionist aspirations. To the Vatican, a British mandate was disturbing, but a Jewish state was anathema.
Vatican opposition to the formation of a Jewish homeland stemmed largely from traditional Christian anti-Semitism, which in modern times took the form of an equation of Zionism with Bolshevism, and ancient theological doctrines regarding Judaism. In 1904, the Zionist leader Theodor Herzl obtained an audience with Pope Pius X in the hope of persuading the pontiff to support the establishment of a Jewish homeland in Palestine. Herzl's hopes were dashed: the Pope's response to his requests was "Non possumus"--"We cannot." In 1917 Pius X's successor, Pope Benedict XV, received a later Zionist leader, Nahum Sokolow, with more courtesy, but displayed an equally sturdy refusal to support a Jewish state. The Zionists, who had pronounced themselves ready to respect the sanctity of the Holy Places, mistakenly believed that the Vatican would be satisfied with control over individual sites, rather than territory.
The Vatican's bid for control over the territory encompassing the Holy Places ultimately failed. The international commission on the Holy Places it had hoped for was never formed, and it was not invited to attend the 1920 Sanremo conference, which decided the fate of Palestine. The Vatican, acting on the same fundamental policy, still refuses to establish diplomatic relations with the state of Israel. Intensively researched and trenchantly argued, The Vatican and Zionism sheds important new light on a critical but neglected episode in the history of Zionism and the Roman Catholic Church.

About the Author
Sergio Minerbi is a Senior Researcher at the Davis Institute of the Hebrew University of Jerusalem and a former Assistant Director General of the Israeli Ministry of Foreign Affairs. He has served as Israel's ambassador to the Ivory Coast, the EEC, and Belgium.

Written by a former Israeli diplomat, this book provides an account of the Vatican's opposition both to the British Mandate in Palestine and to the establishment of a Jewish homeland.