Items related to The Oxford Dictionary of Byzantium: 3 volumes

The Oxford Dictionary of Byzantium: 3 volumes

The Oxford Dictionary of Byzantium: 3 volumes 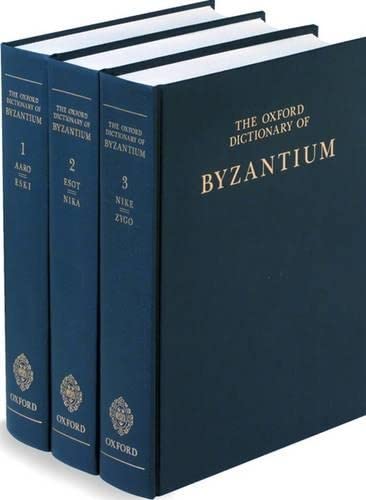 The Oxford Dictionary of Byzantium is the most comprehensive dictionary available on Byzantine civilization. It features more than 5,000 entries written by an international group of eminent Byzantinists covering all aspects of life in the Byzantine world. Major entries treat such topics such as agriculture, art, literature, and politics, whilte shorter entries examine topics that relate to Byzantium, such as the history of Kiev and personalities of ancient and biblical history. It is truly interdisciplinary with entries on patriarchy and emperors sitting alongside those on surgery and musical instruments. Each article is followed by a bibliography, and numerous maps, tables, architectural designs, and genealogies reinforce and clarify the text.

No respectable library can afford to forgo the immediate purchase of the Oxford Dictionary of Byzantium, because it will be cited, throughout the world, as the scholarly reference on all matters Byzantine. (Biblical Archaeology Review)

The Byzantine Empire, with its capital in Constantinople, was from 324-1453 one of the most powerful states in the Mediterranean. Byzantium's unique combination of classical and Christian art and thought contributed directly to the political and cultural development of Italy, eastern Europe, and Russia, while its influence was felt as far afield as Scandinavia, India, and China. This magnificent dictionary, available in print and as an e-reference text from Oxford's Digital Reference Shelf, covers the main historical, social, and religious events, offers biographies of prominent political and literary figures, and provides detailed information on law, music, theology, the arts, warfare, demography, education, agriculture, commerce, science, philosophy, and medicine. Complete with over 200 illustrations, tables, and maps, this is an essential reference for anyone interested in the Empire and its almost inestimable influence.