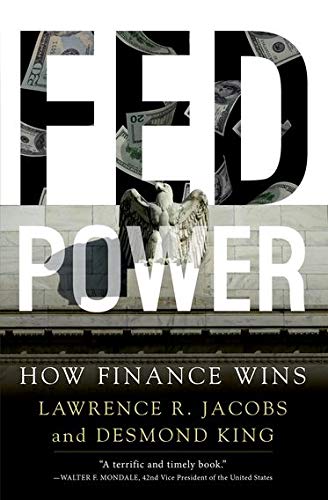 The Federal Reserve, created nearly a century ago, is the most powerful central bank in the world. The Fed's power, which derives from its ability to alter the money supply and move interest rates, weighs heavily not only on the US economy, but on the world economy as well. Not surprisingly, most scholarship on the Fed has focused on its economic role; however, the Fed's power isn't merely economic but is also political. Since its decisions benefit some economic sectors (and hence interest groups) and not others, it effectively makes political choices when shaping economic policy.

Lawrence R. Jacobs and Desmond King's Fed Power is the first sustained synthesis of the Fed's political role-especially the way in which it uses its power to benefit some interest groups and not others-since the 2008 financial crisis. The book closely examines the Fed's unilateral actions during the 2008-9 financial crisis when it leveraged half of the country's net worth without a congressional vote or presidential authorization. While the country was spared a second depression, the Fed's actions doled out lopsided benefits to finance. The Fed's favoritism and unprecedented assertions of power provoked public unease and a bipartisan congressional backlash to restrain it. Fed Power concludes with bold proposals to reform America's financial management to prevent future crises and to restore democratic accountability. A powerful critique of how the Federal Reserve governs the American economy, Fed Power will be essential reading for anyone interested in how inequality has increased since 2009, even throughout a liberal presidency committed to reducing inequality.

[A] groundbreaking book...Fed Power represents a vibrant form of 21st century financial populism and a vital intervention in our political and social debates. (The Huffington Post)

A welcome demonstration that grounded academic work can be entertaining as well as informative. Lawrence Jacobs and Desmond King, political scientists from the universities of Minnesota and Oxford respectively, live up to their claim to 'jettison the all-too-common hermetic language of academia in favor of candor and directness'... A book that is engaging throughout and generally persuasive in its principal thesis that the Fed is a politically loaded institution that drives rising inequality. (The Financial Times, Philip Augar)

Lawrence R. Jacobs is Walter F. and Joan Mondale Chair for Political Studies at the Humphrey School for Public Affairs, the University of Minnesota, and co-author of both Health Care Reform and American Politics (Oxford) and Class War? (Chicago). Desmond King is Andrew W. Mellon Professor of American Government at Oxford University and author of Making Americans (Harvard), as well as co-author of Still a House Divided (Princeton).