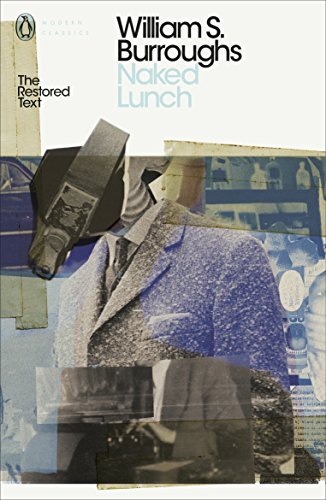 'A masterpiece. A cry from hell, a brutal, terrifying, and savagely funny book that swings between uncontrolled hallucination and fierce, exact satire' Newsweek

'Naked Lunch is a banquet you will never forget' J. G. Ballard

‘A true genius and first mythographer of the mid-twentieth century, William Burroughs is the lineal successor to James Joyce. “Naked Lunch” is a banquet you will never forget.’ JG Ballard

‘Prophesied with unerring accuracy the hideous modes that human behaviour would assume in the post-apocalyptic second half of the twentieth century. “Naked Lunch” is essential reading for anyone who maintains any illusions about anything.’ Will Self

‘William Burroughs broadened people’s conception of what makes humanity. In that way, he really was an American hero, a hero writer, and also just a great man.’ Lou Reed

‘A delirious exploration of sexual violence through the art of collage.’ Time Out

William S. Burroughs was born on February 5, 1914 in St Louis. In work and in life Burroughs expressed a lifelong subversion of the morality, politics and economics of modern America. To escape those conditions, and in particular his treatment as a homosexual and a drug-user, Burroughs left his homeland in 1950, and soon after began writing. By the time of his death he was widely recognised as one of the most politically trenchant, culturally influential, and innovative artists of the twentieth century. His numerous books include Naked Lunch, Junky, Queer, Nova Express, Interzone, The Wild Boys, The Ticket That Exploded and The Soft Machine. After living in Mexico City, Tangier, Paris, and London, Burroughs finally returned to America in 1974. He died in 1997.