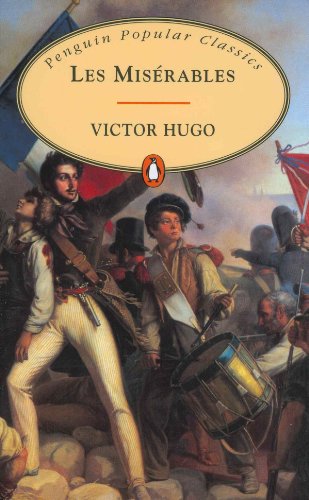 Many of the characters are well-known: Valjean, the criminal trying to escape his reputation; Javert, the police agent trailing him; the unfortunate Fantine and her daughter, Cosette; the rascally Thenardier; and above all the splendid street urchin, Gavroche. Among the unforgettable descriptions are those of the Paris sewers, the battle of Waterloo and the fighting at the barricades during the July Revolution. There are few more complete, or more vivid, pictures of France at the beginning of the nineteenth century. LES MISERABLES is at once a thrilling narrative and a social document embracing a wider field than any other novel of its time.

Victor Hugo was born in Besançon, France in 1802. In 1822 he published his first collection of poetry and in the same year, he married his childhood friend, Adèle Foucher. In 1831 he published his most famous youthful novel, Notre-Dame de Paris. A royalist and conservative as a young man, Hugo later became a committed social democrat and was exiled from France as a result of his political activities. In 1862, he wrote his longest and greatest novel, Les Misérables. After his death in 1885, his body lay in state under the Arc de Triomphe before being buried in the Panthéon.

Book Description Condition: Very Good. This book is in very good condition and will be shipped within 24 hours of ordering. The cover may have some limited signs of wear but the pages are clean, intact and the spine remains undamaged. This book has clearly been well maintained and looked after thus far. Money back guarantee if you are not satisfied. See all our books here, order more than 1 book and get discounted shipping. . Seller Inventory # 7719-9780140624151

Book Description Condition: Very Good. Shipped within 24 hours from our UK warehouse. Clean, undamaged book with no damage to pages and minimal wear to the cover. Spine still tight, in very good condition. Remember if you are not happy, you are covered by our 100% money back guarantee. Seller Inventory # 6545-9780140624151

Book Description Paperback. Condition: Very Good. The book has been read, but is in excellent condition. Pages are intact and not marred by notes or highlighting. The spine remains undamaged. Seller Inventory # GOR003047658