Items related to The Chronicles of the Crusades (Penguin Classics) (Classics...

The Chronicles of the Crusades (Penguin Classics) (Classics S.) 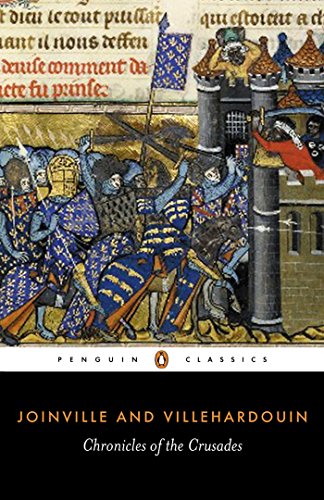 Composed by soldiers who fought in the Holy Wars, these two famous French chronicles are among the most important portrayals of both the dark and light side of the two hundred year struggle for possession of Jerusalem. The first trustworthy and fully informed history of the Crusades, Villehardouin's Conquest of Constantinople describes the era of the Fourth Crusade - the period between 1199 and 1207, during which a planned battle with Moslem forces ironically culminated in war against Eastern Christians that led to the sacking of Constantinople. The Life of Saint Louis, by Joinville, was inspired by the author's close attachment to the pious King Louis, and focuses on the years between 1226 and 1270. It provides a powerful, personal insight into the brutal battles and the fascinating travels of one nobleman, fighting in the Sixth and Seventh Crusades.

GEOFFREY OF VILLEHARDOUIN was born in around 1150 in the county of Champagne, east of Paris. In 1185 he was appointed to the office of marshal of Champagne, a post that nurtured both his administrative and military expertise. Having taken a crusade vow in 1199 he was subsequently appointed as an envoy and was privy to crucial decisions made by the leaders of the Fourth Crusade, which ended in the conquest of Constantinople from its Greek Christian rulers in April 1204. Villehardouin was appointed as marshal in the Latin empire of Constaninople. It was probably in late 1207 that he began dictating The Conquest of Constantinople, his only know written work and perhaps the earliest example of historical writing in French prose. He died between 1212 and 1218, in circumstances that remain obscure.

JOHN OF JOINVILLE was born in 1224 or 1225 into a family prominent in the county of Champagne. In 1233 he inherited the office of seneschal of Champagne that would igive him a leading role in the administrative affairs of the county. He joined the first cruade led by King Louis IX of France, and in 1248 set out on a campaign that would take him to Egypt and the Near East over its six-year course. Joinville became a close friend of Louis IX and after their return to France he was a familiar figure at the royal court, but refused to join Louis on his second crusade. He honoured Louis's memory by giving evidence to the enquiry that established his friend's sanctity and by composing The Life of Saint Louis, which he completed in 1309. Joinville died eight years later, at the age of at least ninety-two.

CAROLINE SMITH studied History at Trinity Hall, Cambridge, from where she graduated with a Ph.D. in 2004. Her publications include Crusading in the Age of Joinville (2006). She lives and works in New York, where she continues to pursue her research on the crusades and thirteenth-century French society, and on the life and writings of John of Joinville.

Margaret Shaw received a first from Oxford in languages, after which she taught in Bradford, before moving to Paris. She did research on Laurence Sterne and published a book about his 'Letter to Eliza'. She became a tutor at St Hugh's, Oxford and translated Stendhal for the Penguin Classics. She died in 1963.