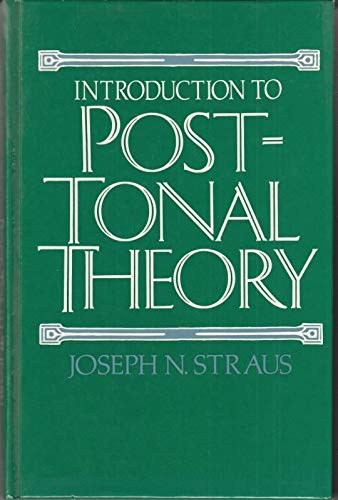 Designed for a course in twenty-first-century techniques and analysis, this text offers a clear, comprehensive introduction to the basic concepts of post-tonal theory. Each concept is clearly explained and richly illustrated with examples from the musical literature. The text contains model analyses as well as carefully graduated exercises that involve playing, singing, composing, and analyzing.

The third edition stays abreast of recent theoretical developments by including discussions of transformational networks and graphs, contour theory, atonal voice leading, triadic post-tonality (including neotonality), inversional symmetry, and interval cycles. As a result, this text is not only a primer of basic concepts but also an introduction to the current state of post-tonal theory, with its rich array of theoretical concepts and analytical tools.

Joseph Straus is Distinguished Professor of Music at the Graduate Center of the City University of New York.  He taught for many years at the University of Wisconsin-Madison and Queens College (CUNY).  The author or editor of twelve books and numerous articles, mostly on topics in twentieth-century music, he is a former President of the Society for Music Theory.