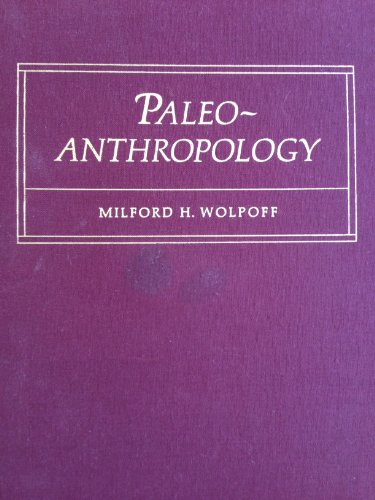 Since the first edition was introduced in 1980, Paleoanthropology has been the leading text for the upper-level undergraduate or graduate course in human evolution. Written by one of the world's leading experts on the subject, and the only human evolution text written by a paleontologist with direct experience with the fossil record, this new edition offers comprehensive coverage of all aspects of human evolution. This edition has been substantially revised and rewritten. It has been expanded to include the most recent research, theories, and new developments in the field, making it the most up-to-date and complete text on the human fossil record available.

Updated to include the latest fossil record and the newest dating techniques.
An extensive set of in-text figures and illustrations.
A comprehensive glossary, defining words boldfaced in each chapter, now appears at the end of the text.
The Origin of Homo sapiens (chapter 9) now precedes The Spread of Humanity (chapter 10), a logical reversal of the order from the first edition.
The multiregional theory of human origins-which holds that there is no single geographical source for modern humans-is balanced with the consistent presentation of traditional views and theories.
The wealth of fossil evidence is presented within a deductive framework to help students understand the course of human evolution.
The text includes the most extensive paleoanthropology bibliography available.

Milford H. Wolpoff is a foremost anthropologist and one of the architects (with Alan Thorne of Australia and Wu Xinzhi of China) of the multiregional theory of human origins. Unlike the out-of-Africa theorists who argue that modern humans evolved in one place, Africa, the multiregionalists argue that there is no one geographical source for modern humans. Wolpoff is the lead author of another important new book, Race and Human Evolution (Simon and Schuster, 1997), the first comprehensive multiregionalist book for the general/trade audience. Wolpoff has done research in Africa, Asia, Australia, Europe and North America.