Items related to Sharpe's Fury: Richard Sharpe and the Battle of... 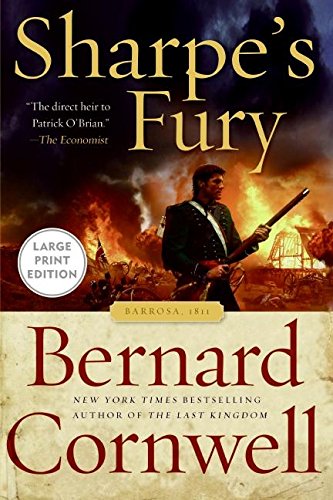 The acclaimed twenty-first novel in the number one bestselling series featuring Richard Sharpe.

In the winter of 1811, the war seems lost. All Spain has fallen to the French, except for Cadiz, now the Spanish capital and itself under siege.

In Cadiz, Richard Sharpe discovers more than one enemy. One of them, a baleful priest, finds a weapon to break the British alliance and Sharpe must find ways to defeat him in a sinister war of knife and treachery in the dark alleys of the city.

As a small British force is trapped by a French army, their only hope lies with the outnumbered redcoats who, on a hill beside the sea, refuse to admit defeat. And there, in the sweltering horror of Barrosa, Sharpe finds his old enemy Colonel Vandal once again.

Praise for Bernard Cornwell and the Sharpe series:

'Cornwell describes military action brilliantly. He evokes all the sights and sounds and smells while managing to describe the fluctuations of the battle with enough vim to keep you in suspense...The Sharpe novels are wonderfully urgent and alive.' Daily Telegraph

‘Cornwell has maintained a marvellously high standard throughout the series...brilliantly lucid and compellingly exciting.' Evening Standard

‘Bernard Cornwell knows his man, knows how to harness his qualities to the services of good fiction, and does not miss a trick...Sharpe and his creator are national treasures.' Sunday Telegraph

'Great action scenes, rich in period detail, are underpinned by a feeling for the passions that shaped the Britain we know today'. Sunday Telegraph, Seven Magazine

Be prepared for scenes of great action & heroics

"I had a word with Sergeant Nolan, so I did, and said you weren't entirely bad unless you were crossed, and then you
were a proper devil. And I told him you had an Irish father, which might be true, might it not?"
"So I'm one of you now, am I?" Sharpe asked, amused.
"Oh no, sir, you're not handsome enough."

Soldier, hero, rogue--the man you always want on your side. Born in poverty, he joined the army to escape jail and climbed the ranks by sheer brutal courage. He knows no other family than the regiment of the 95th Rifles, whose green jacket he proudly wears.

1. Sharpe's Fury : Richard Sharpe and the Battle of Barrosa, March 1811

2. Sharpe's Fury : Richard Sharpe and the Battle of Barrosa, March 1811

Book Description HarperCollins Publishers, 2006. Condition: Good. Large Print. Shows some signs of wear, and may have some markings on the inside. Seller Inventory # 4278071-6

3. Sharpe's Fury : Richard Sharpe and the Battle of Barrosa, March 1811