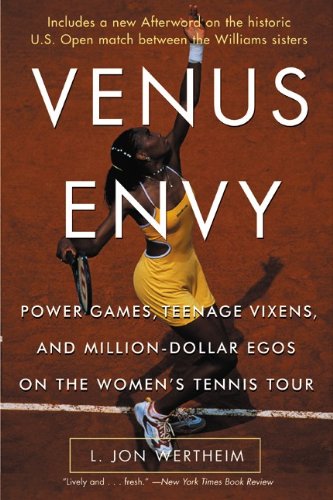 An exciting behind-the-scenes glimpse into the women's tennis tour, from the Grand Slam tournament in Australia to the Williams sisters' triumpant victory at Wimbledon and the U.S. Open, details the characters and psyches of the top players and discusses such topics as race, sexuality, and dysfunctional families. Reprint.

Sports Illustrated investigative reporter and tennis columnist L Jon Wertheim draws back the curtain on the athletic soap opera of women's tennis to reveal its primal plotlines driven by ambition, sex, and revenge. However, by far the biggest story in sports today is Venus Williams. Forced to the sidelines for the early months of the 2000 season by injuries to both her wrists and her psyche, she stormed back to win Wimbledon, the US Open and Two Olympic gold medals. By the time Venus signed the biggest endorsement deal ever for a female athlete, her opponents sentiments could be described in just two words: Venus Envy. Containing a wealth of inside-the-locker room anecdotes about the marquee names in women's tennis, here are the real stories behind the news stories.