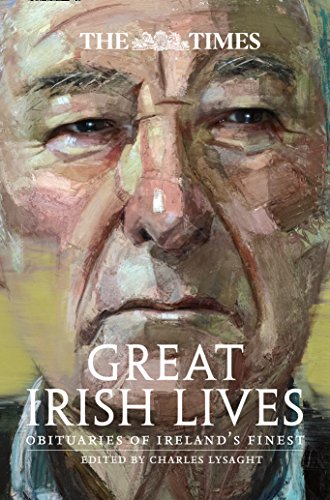 Discover the fascinating lives of the figures that have shaped Ireland from the early nineteenth century to the present day. Explore the rich history of the island’s cultural, social and political landscape, with more than 100 obituaries carefully curated from The Times archive.

The Irish have contributed richly to the world, most notably in literature, but also in the arts, law, politics, religion, scholarship, science, soldiering and sport. In this volume, The Times brings together a unique and fascinating collection of obituaries. The list includes people who have made the greatest impact in their fields, others who have led particularly interesting or influential lives, and a selection of notable Irish figures in the history of The Times.

The obituaries have been compiled and edited by Dubliner Charles Lysaght. A lawyer, biographer and reviewer, Charles is a long-time writer of obituaries for The Times. In his introduction, he discusses the nature of Times obituaries and how they have reflected the sometimes troubled and controversial relationship of the newspaper with Ireland.

This book features the major Irish figures of influence from the last 200 years and includes a diverse range of people, from Daniel O’Connell to Ian Paisley, James Joyce to Maureen Potter. This updated second edition builds on the first by adding some of Ireland’s most notable characters from the modern era, such as Maeve Binchy, Conor Cruise O’Brien and Terry Wogan.

Irish lawyer, author and reviewer. Long-time contributor of Irish obituaries to The Times.