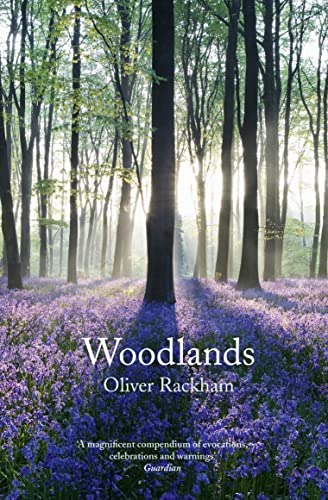 ‘Trees are wildlife just as deer or primroses are wildlife. Each species has its own agenda and its own interactions with human activities ...’

Written by one of Britain’s best-known naturalists, Woodlands offers a fascinating new insight into the trees of the British landscape that have filled us with awe and inspiration throughout the centuries.

Looking at such diverse evidence as the woods used in buildings and ships, and how woodland has been portrayed in pictures and photographs, Rackham traces British woodland through the ages, from the evolution of wildwood, through man’s effect on the landscape, modern forestry and its legacy, and recent conservation efforts and their effects.

In his lively and thoroughly engaging style, Rackham explores woodlands and their history, through names, surveys, mapping and legal documents, archaeology, photographs and works of art, thus offering an utterly compelling insight into British woodlands and how they have come to shape a national obsession.

‘Rackham has been a great champion for real woods and against the endless postwar conifer plantations – a campaign now largely won. Here he is writing not as a conservationist, but simply to share his prodigious knowledge of woods and trees with the reader.’
The Times

‘... A magnificent compendium of evocations, celebrations and warnings – the harvest of a long lifetime, gathered slowly but with unflagging passion.’
Guardian

‘The Woodland Trust welcomes Oliver Rackham’s latest book celebrating the glories of our irreplaceable ancient woodland heritage. Restoration of ancient woods and creation of new woods is vital to creating a countryside which is more sympathetic to woodland wildlife, and which delivers benefits to society.’
Woodland Trust

‘Magnificent, masterful ... For those of us who worship trees, Rackham is our (slightly grumpy) High Druid. A true classic.’
The Week

Oliver Rackham, OBE (1939–2015) was a leading historian and ecologist of British woodlands and the landscape. He wrote various books on trees and woodland, including the bestselling The History of the Countryside (1986) and The Ash Tree (2014). Oliver’s discoveries about past practices informed present-day woodland management, and he was heavily involved in conservation efforts. In 1964, he was elected a fellow of Corpus Christi College, Cambridge and appointed a University Demonstrator in the Department of Botany. He remained a fellow of Corpus for the rest of his life, and in 2006 became an honorary professor. He is considered to have been the first scholar to explore woods from a variety of different perspectives – ecology, archaeology, timbers, place names, manuscript records – in order to recreate a wood’s history, and was widely admired for his unique and accessible writing style, all of which has been beautifully captured in his last great work, Woodlands, first published in 2006.

Book Description Paperback / softback. Condition: New. New copy - Usually dispatched within 4 working days. `Trees are wildlife just as deer or primroses are wildlife. Each species has its own agenda and its own interactions with human activities .'. Seller Inventory # B9780008156916