Items related to A Game of Thrones (Hardback reissue): Book 1 (A Song...

Martin, George R.R. A Game of Thrones (Hardback reissue): Book 1 (A Song of Ice and Fire)

A Game of Thrones (Hardback reissue): Book 1 (A Song of Ice and Fire) 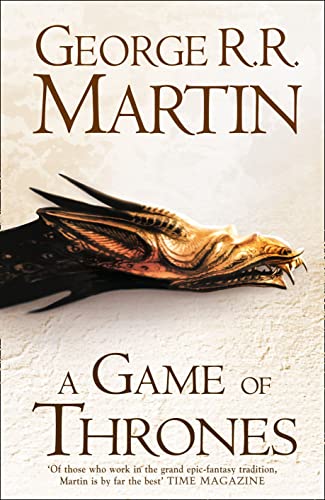 HBO's hit series A GAME OF THRONES is based on George R R Martin's internationally bestselling series A SONG OF ICE AND FIRE, the greatest fantasy epic of the modern age. A GAME OF THRONES is the first volume in the series. Summers span decades., Winter can last a lifetime. And the struggle for the Iron Throne has begun. It will stretch from the south, where heat breeds plot, lust and intrigues; to the vast frozen north, where a 700-foot wall of ice protects the kingdom from the dark forces that lie beyond., As Warden of the North, Lord Eddard Stark counts it a curse when King Robert bestows on him the office of the Hand. His honour weighs him down at court where a true man does what he will, not what he must...and a dead enemy is a thing of beauty. The old gods have no power in the south, Stark's family is split and there is treachery at court., Worse, a vengeance-mad boy has grown to maturity in exile in the Free Cities beyond the sea. Heir of the mad Dragon King deposed by Robert, he claims the Iron Throne. In the game of thrones, you win or you die.

‘After five volumes Martin is, if anything, a better writer than when he started. If you're watching A Game of Thrones on HBO, you're foregoing the great pleasure of Martin's deft prose...’
Time Magazine

'A Game of Thrones has captured the imaginations of millions for the same reason the archetypal dramas of Homer, Sophocles or Shakespeare have lasted for millennia. They show us the conflict between self-sacrifice and self-interest, between the human spirit and the human ego, between good and evil. And when we look up from the page we recognise those same conflicts in the world around us and in ourselves'
The Guardian

‘Colossal, staggering... Martin captures all the intoxicating complexity of the Wars of the Roses or Imperial Rome in his imaginary world... one of the greats of fantasy literature.’
SFX

‘Fantasy literature has never shied away from grandeur, but the sheer-mind-boggling scope of this epic has sent other fantasy writers away shaking their heads... Its ambition: to construct the Twelve Caesars of fantasy fiction, with characters so venomous they could eat the Borgias.’
Guardian

‘Such a splendid tale. I couldn’t stop till I’d finished and it was dawn.’
Anne McCaffrey

Long ago, in a time forgotten, a preternatural event threw the seasons out of balance. In a land where summers can last decades and winters a lifetime, trouble is brewing. The cold is returning, and in the frozen wastes to the north of Winterfell, sinister forces are massing beyond the kingdom's protective Wall. To the south, the king's powers are failing: his most trusted advisor dead under mysterious circumstances and his enemies emerging from the shadows of the throne. At the center of the conflict lie the Starks of Winterfell, a family as harsh and unyielding as the frozen land they were born to. Now Lord Eddard Stark is reluctantly summoned to serve as the king's new Hand, an appointment that threatens to sunder not only his family but the kingdom itself. Sweeping from a harsh land of cold to a summertime kingdom of epicurean plenty, A Game of Thrones tells a tale of lords and ladies, soldiers and sorcerers, assassins and bastards who come together in a time of grim omens. Here, an enigmatic band of warriors bear swords of no human metal, a tribe of fierce wildings carry men off into madness, a cruel young dragon prince barters his sister to win back his throne, a child is lost in the twilight between life and death, and a determined woman undertakes a treacherous journey to protect all she holds dear. Amid plots and counterplots, tragedy and betrayal, victory and terror, allies and enemies, the fate of the Starks hangs perilously in the balance, as each side endeavors to win that deadliest of conflicts: the game of thrones.

1. A Game of Thrones