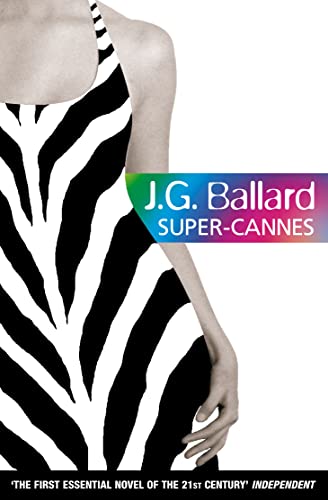 A high-tech business park on the Mediterranean coast is the setting for crime of the most disturbing kind in this extraordinary new bestseller from the author of Cocaine Nights.

After over three decades at the forefront of modern British fiction writing, J.G. Ballard reached a new generation of readers with the bestselling ‘Cocaine Nights’ – an intriguing murder mystery that was also an unnerving vision of a society with too much time on its hands. Now, in ‘Super-Cannes’, he delves into another closed community – where this time it is claimed that ‘work is the new leisure.’

A disturbing mystery awaits Paul and Jane Sinclair when they arrive in Eden-Olympia, a high-tech business park in the hills above Cannes. Jane is to work as a doctor for the executives who live in this ultra-modern workers’ paradise. But what caused her apparently sane predecessor to set out one morning and murder ten people in a shooting spree that made headlines around the world? As Paul investigates his new surroundings, he begins to uncover a thriving subculture of crime that is spiralling out of control.

JG Ballard covers familiar territory in Super-Cannes: new social structures under pressure, new psychopathologies to be explored. As he did in his previous novel Cocaine Nights, he has avoided the more abstract imagery and plot of Rushing to Paradise or The Day of Creation to create, on the surface, a more mainstream novel, clearly concerned with modern issues of racism, random violence and sexuality. But familiar territory is always the most deeply subversive place in a Ballard novel.

Eden-Olympia is more than a mere business park. It is an expensive and intense hive, the modern "Dream Palace" of "a new elite of administrators, enarques and scientific entrepreneurs"; its aim, "to turn Provence into Europe's silicon valley". Paul Sinclair finds himself with time on his hands in this radical environment when his young wife takes a job at Eden-Olympia. She replaces a doctor who killed 10 executives with a rifle before shooting himself. He left no note and no explanation. Sinclair finds himself living in the same house and learning some of the same lessons as the killer.

There are the (un)usual Ballardian motifs; the injured airman, the swimming pools, the cars, the voyeuristic sex and violence, the perverse personal iconography of the central characters (the hothouse social environment even harks back to High-Rise from 1975), but in this new context they are even more profoundly unsettling than before. The apparently slick, professional characters are flawed and ambiguous, while strange events, as in the outstanding novella Running Wild from 1988, lead to extreme conclusions. Ballard is an expert in explaining how what at first appears perverse, amoral or simply wrong, is actually obvious, sensible and sane, and then going even further. From the beginning, the clues are all there. Eventually, both Sinclair and the reader are clear on what must be done. --John Shire

‘Sublime... an elegant, elaborate trap of a novel, which reads as a companion piece to Cocaine Nights but takes ideas from that novel and runs further. The first essential novel of the 21st century.’ Independent

‘Possibly his greatest book. Super-Cannes is both a novel of ideas and a compelling thriller that will keep you turning the pages to the shocking denouement. Only Ballard could have produced it.’ Sunday Express

‘In this tautly paced thriller he brilliantly details how man’s darker side derails a vast experiment in living, and shows the dangers of a near-future in which going mad is the only way of staying sane.’ Daily Mail

‘Truly superb... the best book he has written.’ Daily Express

Book Description Paperback. Condition: Very Good. The book has been read, but is in excellent condition. Pages are intact and not marred by notes or highlighting. The spine remains undamaged. Seller Inventory # GOR003550560

Book Description Paperback. Condition: Good. The book has been read but remains in clean condition. All pages are intact and the cover is intact. Some minor wear to the spine. Seller Inventory # GOR003548874

Book Description Paperback. Condition: Fair. A readable copy of the book which may include some defects such as highlighting and notes. Cover and pages may be creased and show discolouration. Seller Inventory # GOR010822774