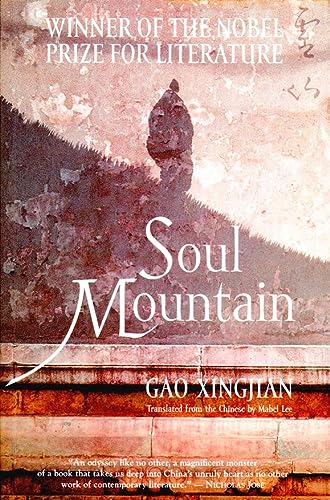 In 1982 Chinese playwright, novelist and artist Gao Xingjian was diagnosed with lung cancer, the very disease which had killed his father. For six weeks Gao inhabited a transcendental state of imminent death, treating himself to the finest foods he could afford while spending time reading in an old graveyard in the Beijing suburbs. But a secondary examination revealed there was no cancer – he had won a ‘reprieve from death’ and had been thrown back into the world of the living.

Faced with a repressive cultural environment and the threat of a spell in a prison farm, Gao fled Beijing. He travelled first to the ancient forests of central China and from there to the east coast, passing through eight provinces and seven nature reserves, a journey of fifteen thousand kilometres over a period of five months. The result of this epic voyage of discovery is Soul Moutain.

Interwoven into this picaresque journey are myriad stories and countless memorable characters – from venerable Daoist masters and Buddhist monks and nuns to mythical Wild Men; deadly Qichun snakes to farting buses. Conventions are challenged, preconceptions are thwarted and the human condition, with all its foibles and triumphs, is laid bare.

As one of Gao Xingjian's characters remarks, if a fiction writer could know the true stories of the people he passes on the street, he would be amazed. Surely the Nobel laureate's own story, which forms the basis of Soul Mountain, is worthy of amazement. In 1983 Gao was diagnosed with lung cancer, the disease that had killed his father. At the same time, he had been threatened with arrest for his counterrevolutionary writings and was preparing to flee Beijing for the remote regions of southwest China. Shortly before his departure, however, the condemned man got at least a partial reprieve: a second set of x-rays revealed no cancer at all. On the heels of this extraordinary redemption, he began the circuitous journey that would lead him to the sacred (and possibly mythical) mountain of Lingshan--and to this daring, historically resonant novel.

A destination chosen arbitrarily, at the suggestion of a fellow traveller, the elusive Lingshan becomes rich with meaning for the narrator of Soul Mountain. Meanwhile, the narrator himself shows a tendency to go forth and multiply. First he divides into You and I. Then You generates yet a third voice, a somewhat simple but intense young woman named She, followed by He--and none of these personae can resist the elemental lure of the sacred site. Indeed, the search for Lingshan becomes a metaphor for all spiritual striving:

Along the way, I and You mourn the devastations of the Cultural Revolution, when thousands of monuments, temples, and graves were reduced to rubble. The obliteration of these reminders of the dead becomes a torment to the narrators of the novel, who struggle to assert their individuality--itself a proscribed act in Communist China--against what they see as a false and brutal ideal that has swept away history, literature, and tradition as decisively as it has destroyed the ancient forests. (At one point Gao describes the sad spectacle of the few remaining pandas, who wander a shrinking woodland wearing electronic transmitters.) Seamlessly translated by the Australian scholar Mabel Lee, Soul Mountain is a masterpiece of self-observation set against a soulful denunciation of "progress" and practicality. --Regina Marler

'Gao has helped illuminate the human condition for people throughout the world in ways that bring credit to him and to literary endeavour.' THES

'There is a sense throughout that Gao is running after things that are already vanishing. On the nature reserves, people are shooting bears and even pandas; trees are being cut down a hundred times faster than before. Stones inscribed with historical inscriptions have been dynamited to yield materials for bridges that were never built... Soul Mountain is Gao's attempt to bring back what is lost. In the end, his gift is to look beyond politics at the human condition, offering no easy explanations and refusing artificial allegiances.' Sunday Times

‘Gao transcends cultural barriers. A good story will out in any language, and when Gao is good he is staggeringly so. His writing about the Cultural Revolution is remarkable.' Daily Telegraph

'A picaresque novel on an epic scale... Soul Mountain bristles with narratives in miniature – stories from ancient Chinese history, folk tales, childhood reminiscences, memories of the Cultural Revolution, as well as bitter arguments and passionate sex. Gao's aim is to represent "the ineffability of life", and, as far as that is possible to do, he has done it in this complex, rich and strange novel.' Independent on Sunday