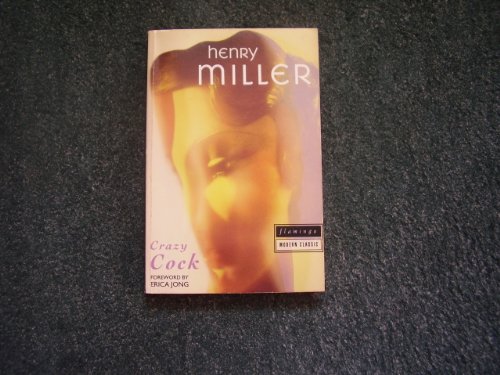 Set in the colourful world of Greenwich Village in the 1920s, this semi-autobiographical novel follows the story of Tony Bring, a struggling writer whose bourgeois upbringing and inclinations collide with the disordered bohemianism of his beloved wife, Hildred.

In 1930 Henry Miller moved from new York to Paris, leaving behind (at least temporarily) his tempestuous marriage to June Smith and a novel he fully expected to be his masterpiece. Begun in 1927, and originally titled 'Lovely Lesbians, Crazy Cock' sprang from his anguish over June’s love affair with a mysterious woman called Jean Kronski. Purging himself of this pain through the writing of 'Crazy Cock' helped Miller to discover his true voice a few years later in 'Tropic of Cancer'.

“It is a shame that Miller is not around to report on the War of the Hormones. 'Crazy Cock' is a dispatch from the front. His critics will use the novel’s sexual and political incorrectness to disguise the reality that he understood the ever-present prejudices and confusions of women and men better than any of the talk-show munchkins. 'Crazy Cock' is full of the sheer force of Miller’s language and the sexual pitch and youthful literary eagerness which start cafe brawls and outrage high-school librarians.”
LONDON REVIEW OF BOOKS

“Miller’s account of the writer’s misery is vivid and affecting and he tells his story with feeling. At times it is so raw it hurts, at other times the rawness manifests itself in an exhilarating spontaneity.”
SUNDAY TELEGRAPH

“To write, Miller always required an air of the literary, and 'Crazy Cock' supplies the blueprint.”
NEW YORK TIMES

Henry Miller was born in Brooklyn, New York. He had a variety of jobs as a young man, including several years working for the Western Union Telegraph Company. During this time, encouraged by June Mansfield Smith, the second of his five wives, Miller began to write. Aside from articles, stories for pulp magazines and prose poems, Miller worked on his first novels ‘Crazy Cock’ and ‘Moloch’, and on the copious notes which would eventually transmute into the notorious ‘Tropics’ books.

Book Description Flamingo 12/07/1993, 1993. Condition: Very Good. This book is in very good condition and will be shipped within 24 hours of ordering. The cover may have some limited signs of wear but the pages are clean, intact and the spine remains undamaged. This book has clearly been well maintained and looked after thus far. Money back guarantee if you are not satisfied. See all our books here, order more than 1 book and get discounted shipping. . Seller Inventory # 7719-9780006545859

Book Description Flamingo 12/07/1993, 1993. Condition: Very Good. Shipped within 24 hours from our UK warehouse. Clean, undamaged book with no damage to pages and minimal wear to the cover. Spine still tight, in very good condition. Remember if you are not happy, you are covered by our 100% money back guarantee. Seller Inventory # 6545-9780006545859

Book Description Paperback. Condition: Very Good. The book has been read, but is in excellent condition. Pages are intact and not marred by notes or highlighting. The spine remains undamaged. Seller Inventory # GOR002705057

Book Description Flamingo, 1993. Condition: Good. A+ Customer service! Satisfaction Guaranteed! Book is in Used-Good condition. Pages and cover are clean and intact. Used items may not include supplementary materials such as CDs or access codes. May show signs of minor shelf wear and contain limited notes and highlighting. Seller Inventory # 0006545858-2-4