Items related to DAUGHTER OF THE FOREST: Book 1 (The Sevenwaters Trilogy)

Marillier, Juliet DAUGHTER OF THE FOREST: Book 1 (The Sevenwaters Trilogy)

DAUGHTER OF THE FOREST: Book 1 (The Sevenwaters Trilogy) 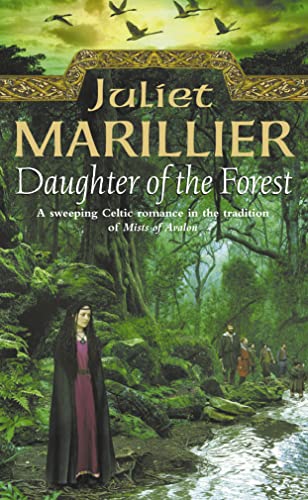 A magnificent saga set in the Celtic twilight of 10th century Ireland, when myth was law and magic was a power of nature, brilliantly brought to life: the legendary story of an evil stepmother opposed by a seventh child.

A wicked woman, an evil curse, and a love that must triumph over impossible odds

Set in the Celtic twilight of ancient Ireland, when myth was law and magic a force of nature, this is the tale of Sorcha, seventh child of a seventh son, the forbidding Lord Colum, and of her six beloved brothers.

The keep at Sevenwaters is a remote, strange, quiet place, guarded by silent men who slip through the woodlands clothed in grey, and keep their weapons sharp. For there are invaders outside the forest; raiders from across the seas, Britons and Vikings bent on destruction. But now there is also an invader inside the keep: the Lady Oonagh, a sorceress as fair as day, but with a heart as black as night. Oonagh captivates Lord Colum with her sensual wiles; but she cannot enchant the wary Sorcha. Frustrated in her attempts to destroy the family, Oonagh binds the brothers with a spell that only Sorcha can lift. If she fails, they will die.

Then the raiders come, and Sorcha is taken captive.
Soon she will find herself torn between her duty to break the curse, and a growing, forbidden love for the warlord who is her captor.

Like Marion Zimmer Bradley’s MISTS OF AVALON or Jean Auel’s CLAN OF THE CAVE BEAR, this is first-rate historical fantasy that can have the widest possible appeal, taking in also the readership of historical fiction writers like Mary Stewart , Mary Renault and Anya Seton.

Juliet Marillier's intensely romantic first novel Daughter of the Forest takes the reader to an Ireland on the edge where history and fairy tale meet. Sorcha, seventh child of a seventh son, finds herself caught up in the manipulations of a wicked and sorcerous stepmother, the whims of faerie and the purely human evil of a fanatical British lord. Acts of kindness have the most terrible of consequences and people's strongest virtues are used against them. First volume of a trilogy, Daughter of the Forest is a stunning debut that takes one of the most moving of fairy stories and renders it in vivid painful detail--rarely have the day-to-day consequences of magic's demands been made so directly unpleasant. Sorcha is a figure of fortitude to stand with the great heroines of contemporary fantasy; she does what she has to and takes the consequences at every turn. The author creates a cast of worthy allies and enemies for Sorcha as she travels from a remote Irish fortress to the depths of a forest in a Britain caught between its Celtic and European identities. --Roz Kaveney

‘Juliet Marillier’s intensely romantic first novel takes the reader to an Ireland on the edge, where history and fairy tale meet ... a stunning debut’ AMAZON.CO.UK

‘I enjoyed it enormously. It is a fantasy, full of the magic of the Celtic night, but it has that wonderful all-important feel of reality ... a wonderful, riveting story’ BARBARA ERSKINE on Son of the Shadows

Daughter of the Forest Book 1 The Sevenwaters Trilogy

Daughter of the Forest (Sevenwaters Trilogy)

Daughter of the Forest (The Sevenwaters Trilogy, Book 1)

Daughter of the Forest (The Sevenwaters Trilogy, Book 1)