Items related to The Time Ships 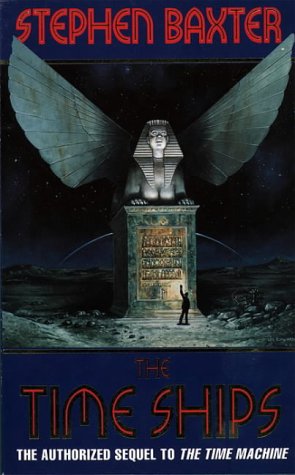 The highly-acclaimed sequel to H G Wells’s The Time Machine, from the heir to Arthur C. Clarke.

Written to celebrate the centenary of the publication of H G Wells’s classic story The Time Machine, Stephen Baxter’s stunning sequel is an outstanding work of imaginative fiction.

The Time Traveller has abandoned his charming and helpless Eloi friend Weena to the cannibal appetites of the Morlocks, the devolved race of future humans from whom he was forced to flee. He promptly embarks on a second journey to the year AD 802,701, pledged to rescue Weena. He never arrives! The future was changed by his presence... and will be changed again. Hurled towards infinity, the Traveller must resolve the paradoxes building around him in a dazzling temporal journey of discovery. He must achieve the impossible if Weena is to be saved.

What if the time machine from H.G. Wells' classic novel of the same name had fallen into government hands? That's the question that led Stephen Baxter to create this modern-day sequel, which combines a basic Wellsian premise with a Baxteresque universe-spanning epic. The Time Traveller, driven by his failure to save Weena from the Morlocks, sets off again for the future. But this time the future has changed, altered by the very tale of the Traveller's previous journey.

‘I’m almost tempted to say (I know this is blasphemy) that the sequel is better than the original ...’
Arthur C. Clark

‘Arthur C. Clarke, Isaac Asimov and Robert Heinlein succeeded in doing it, but very few others. Now Stephen Baxter joins their exclusive ranks. The reaction is that which C. S. Lewis referred to when he described science fiction as the only genuine consciousness-expanding drug.’
NEW SCIENTIST

‘Stephen Baxter really does stand on the shoulders of giants in order to see further than they did ... THE TIME SHIPS is a brilliant piece of work. It is a sequel in the best possible sense’
INTERZONE