Items related to Storm Command: A Personal Account of the Gulf War

Storm Command: A Personal Account of the Gulf War 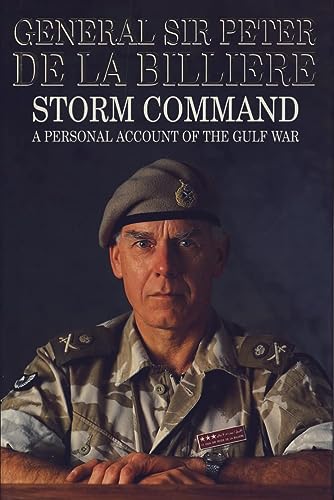 ‘More gripping than fiction; take the graphic account of an SAS corporal’s harrowing 200-mile escape through western Iraq, for instance - a tale almost too incredible for a thriller... An important and enjoyable book.’
Christopher Bellamy, Independent

‘Fascinating... Deserves a place even in the glorious annals of British soldiering.’
James Buchan, Spectator

‘This excellent and moving book builds up to a most exciting climax.’
Sunday Times

‘A commander who made men do almost impossible things by doing them himself first... A soldier who from the most undisciplined and unpromising beginnings achieved complete mastery of himself and hte men who fought under him.’
Daily Telegraph

Desert Storm was a war like no other. Fought with weapons of a sophistication beyond anything previously displayed in battle against a ruthless dictator whose invasion of Kuwait had been universally condemned, it was a conflict waged with an unparalleled sense of international common purpose. Under the fierce glare of world media attention, commanders had to be appointed to manage a highly volatile situation - with hostages shielding Saddam Hussein's military installations, Iraq's breached trade sanctions, needing enforcement, the constant threat of chemical warfare and the Coalition's objectives gradually shifting from defence to offence. One officer stood head and shoulders above his peers as the man to command the British forces in the Gulf. After a lifetime in the SAS, and as the most decorated officer in the army, with experience of tri-service command in the Falklands and a comprehensive understanding of Arab life and language, General Sir Peter de la Billiere was unique in having all the credentials for the task. This book chronicles the war from the Allied nerve centre, analyzing Americans' execution of the air and land campaigns.

It also shows how the British commander insisted on transferring his ground forces to a more crucial sector of the battlefield and how he persuaded Schwarzkopf to deploy the SAS in the western desert of Iraq.

1. Storm command: a personal account of the Gulf War

2. Storm command: a personal account of the Gulf War

3. Storm command: a personal account of the Gulf War

4. Storm Command: A Personal Account of the Gulf War