Items related to Antimachus of Colophon: Text and Commentary (Mnemosyne,... 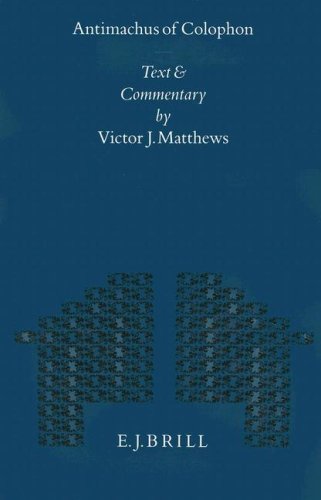 This volume is an edition of the fragments of the Greek epic and elegiac poet, Antimachus of Colophon (ca. 400 B.C.), an important figure linking the literatures of Archaic and Classical Greece with that of the Hellenistic Age. The introduction examines the poet's life and work, discussing both his poetry and his activity as a Homeric scholar. It concludes with an assessment of his reception by Hellenistic and later writers. The body of the book is a critical edition of the 200-plus fragments of Antimachus' work. Each fragment is supplied with a commentary elucidating both text and context, with particular emphasis on Antimachus' use of his predecessors, especially Homer, and on his own influence upon the Hellenistic scholar-poets.

Victor J. Matthews, Ph.D. (1968), Queen's University, Belfast, is Professor of Classics at the University of Guelph, Canada. His previous publication on Greek epic poetry include Panyassis of Halikarnassos. Text and Commentary (Brill, 1974).

Book Description Condition: Good. A+ Customer service! Satisfaction Guaranteed! Book is in Used-Good condition. Pages and cover are clean and intact. Used items may not include supplementary materials such as CDs or access codes. May show signs of minor shelf wear and contain limited notes and highlighting. Seller Inventory # 9004104682-2-4