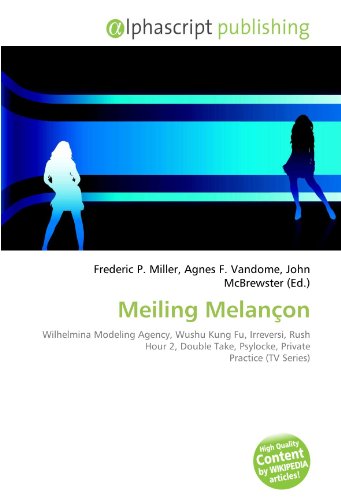 Please note that the content of this book primarily consists of articles available from Wikipedia or other free sources online. Meiling MelanĂ§on (born 3 March 1980) also known as Mei MelanĂ§on, is an American actress and former fashion model. Raised in Japan, Mei is of French, Chinese, and Japanese descent. As a child she traveled throughout Asia and Europe. At the age of five her mother taught her how to play the guitar, and she was later in a children''s band called Blossoms in Japan where she grew up. Mei started acting in 2003. She was at that time a successful model and was signed to Wilhelmina Modeling Agency. She has also appeared in over 100 commercials. In her free time she enjoys rock-climbing, camping, surfing, and practicing Wushu Kung Fu. Mei currently resides in Los Angeles, California.