Captain John Franklin and Sir Ernest Shackleton: The History of Britain’s Most Famous Polar Explorers and Their Expeditions 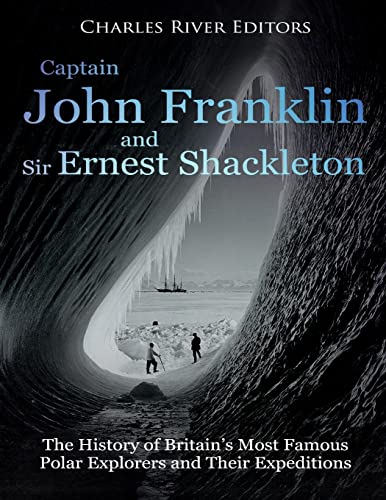 Captain John Franklin and Sir Ernest Shackleton: The History of Britainâ s Most Famous Polar Explorers and Their Expeditions

Captain John Franklin and Sir Ernest Shackleton: The History of Britain's Most Famous Polar Explorers and Their Expeditions (Paperback)

Book Description Paperback. Condition: New. Language: English. Brand new Book. *Includes pictures *Includes contemporary accounts *Includes online resources and a bibliography for further reading Most anyone who has received a basic education in world history knows the story of how "in 1492, Columbus sailed the ocean blue." Most also know that Christopher Columbus made first contact with the Americas while searching for a water route to Asia. However, far fewer people remember that the search for such a route continued for centuries after Columbus' death. After the discovery of the Americas, several European countries were interested in finding the route, and nations from France to Spain sent out explorers searching for the mysterious route. While these voyages did not reveal the hoped for route, they did result in large parts of both North and South America being mapped, and as more of the new land mass was determined, the parameters of the search for such a route were narrowed. By the 18th century, explorers began to seek such a route to the north, looking for the legendary Northwest Passage. Eventually, some countries lost interest, but England remained determined, and the masters of the waves continued to send ship after ship and crew after crew across the Atlantic. By the early 19th century, the search was taking expeditions to the Arctic, and each time a team returned to England telling stories of how it was stymied by ice or bad weather, another team confidently went out, certain that it would be the one to make it through. This ultimately led to the voyage of Captain John Franklin, who left Britain in 1845 for the Arctic in the hopes of completing mapping the Northwest Passage. Instead of returning with spices and silks, Franklin and his men disappeared, leaving behind them a mystery that plagued the English conscience for decades. Ironically, the ill-fated trip only became more legendary when its mystery was solved than it was when it remained a curiosity. It was a tale of ice and cold, starvation and desperation, and a tragically fatal one. Exploration of Earth's wilderness areas became an international obsession in the late 19th and early 20th centuries, as economically advantaged nations, in particular European powers and the United States were well equipped to mount exhaustive expeditions. From previously inaccessible forests and jungle country to the world's great mountain ranges, adventurers sought out the greatest extremes of climate and terrain in a race to plant the first flag where humanity struggled to survive. Locating the North Pole was, in a navigational sense, far more problematic than its counterpart in the south. The North Pole is situated on a moving foundation of ice, constantly shifting its position. To plant a flag there is useless, as it is prone to drift great distances in an unpredictable direction. However, reaching the South Pole presented the most torturous climatic obstacle on the planet, and with the size of the ice continent in the early years of the century, the distance from a ship in harbor to the center required a vast trek carrying minimal rations. Britain made its first and finest statement for actually reaching the South Pole in the first years of the 20th century. The dangers of the Antarctic, including scurvy, dehydration, and hypothermia, were well known to all major explorers. They also understood that even the most incidental detail of an expedition going amiss could spell doom for all parties involved. The era was universally dubbed the Heroic Age of Antarctic Exploration, but its greatest story did not stem from the actual achievement of reaching the pole. It was, rather, one of the most profound and heroic rescues ever witnessed that affirmed the empire's greatness, embodied by the inspired insistence and exemplary conduct of Sir Ernest Henry Shackleton. This unlikely figure entered the rich man's world of polar exploration through an astonishing persistence. Seller Inventory # APC9781985070530

Captain John Franklin and Sir Ernest Shackleton: The History of BritainaTMs Most Famous Polar Explorers and Their Expeditions

Captain John Franklin and Sir Ernest Shackleton: The History of Britain's Most Famous Polar Explorers and Their Expeditions