Items related to Radical Unschooling: A Revolution Has Begun

Radical Unschooling: A Revolution Has Begun 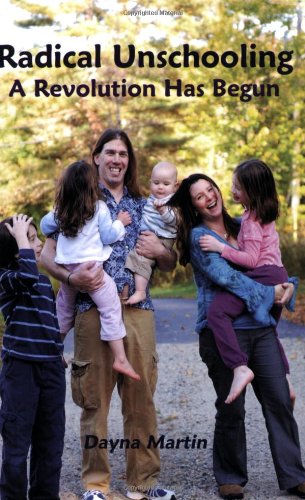 "Radical Unschooling" is a progressive parenting philosophy, which includes children learning at home. It is different from homeschooling in that children are not forced to follow curriculum lessons and tests. Radical Unschooling philosophy focuses on trust of a child's innate ability to learn without coercion and invites children to explore their passions. The parent's role is to facilitate their interests and curiosity. The book focuses also on the evolutionary aspect of parenting and human consciousness. We are parenting and educating our children today to succeed in a joyful, productive life by following their passions, not someone else's agenda.

Dayna Martin is a passionate radical unschooling advocate who enjoys speaking about her unique and joyful family life. Dr Phil invited Dayna and Joe Martin to be his featured guests on the Dr. Phil Show in 2007. The whole Martin family appeared on Fox News in Sept. 2008 in a segment with John Taylor Gatto, three-time NYC Teacher of the Year. Dayna is wife to Joe and proud mother of four unschooled children. The Martin family lives in the White Mountains of New Hampshire and enjoys traveling the country in their motor home speaking at conferences about Radical Unschooling and inspiring everyone they meet. Home: Madison, NH

“In my heart of hearts, I've always been a radical unschooler. There is no doubt in my mind that our families and our global community would be far healthier if this approach were embraced.” Christiane Northrup, M.D., Author of The Secret Pleasures of Menopause (Hay House 2008), The Wisdom of Menopause (Bantam, revised 2006), Women's Bodies, Women's Wisdom (Bantam, revised 2006), and Mother-Daughter Wisdom (Bantam 2005) “Full of brilliant common sense! Mrs. Martin takes us behind the curtain to see in rich detail what alternative education really looks like when it bestows upon its subjects the freedom to choose. Every parent who feels compelled to give their kids into the care of total strangers should read this book.” --John Taylor Gatto, Author: Dumbing Us Down And Weapons of Mass Instruction