Items related to City of the Horizon (Huy the Scribe Mysteries)

Gill, Anton City of the Horizon (Huy the Scribe Mysteries)

City of the Horizon (Huy the Scribe Mysteries) 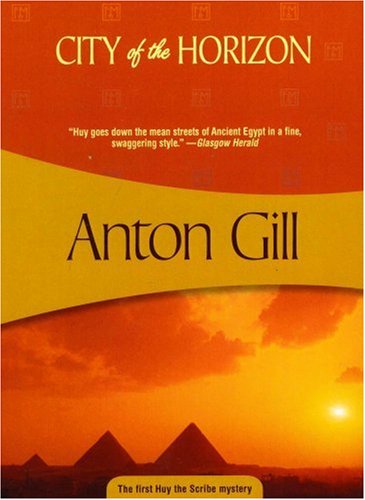 Palace intrigues, the death of one-time royal favorites . . . it may sound like Tudor England, but it's Egypt during the 18th Dynasty, about 1350 B.C. Akhenaten, the ?reformist? pharaoh, has died, and his successor, the child pharaoh Tutankhamun, is effectively controlled by political schemers with no love for Akhenaten's old supporters, now deemed heretics. Many of these have lost their lives, but Huy, once a scribe in Akhenaten's court, is luckier: He's lost merely his home and the right to practice his trade. In desperation, Huy becomes a sort of traveling troubleshooter, the world's first private eye. City of the Horizon marks his first case, bringing him up against both Egypt's powerful priesthood and a brutal gang of tomb-robbers, all while he's trying to evade the clutches of the secret police. The modern world, it seems, has no monopoly on duplicity and corruption.

Anton Gill was educated at Chigwell School and Clare College, Cambridge. He became a full-time writer in 1984 after a few years working in the theatre, for the Arts Council and for the BBC. He is the author of a number of books, largely in the field of contemporary history, including studies of Germany before, during, and after World War II. He is also the author of "Art Lover", a highly acclaimed biography of the collector of surreal and abstract art Peggy Guggenheim. When he isn't writing, Anton Gill travels. When he is, he lives in Bloomsbury, London.

2. City of the Horizon The First Huy the Scribe Mystery

4. City of the Horizon (Huy The Scribe)