Items related to The Road: Short Fiction and Essays

The Road: Short Fiction and Essays 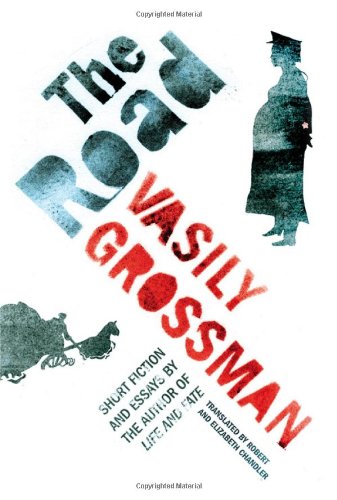 Vasily Grossman is widely recognized by Russian scholars as one of the outstanding literary figures of the twentieth century. The short fiction collected here - satire, comedy, tragedy and pure narrative - demonstrates all the bold intelligence, integrity and extraordinary vividness for which he has become known.

'Readers familiar with his novels will be surprised by his short fiction. They show a writer of infinite variety' Victor Sebestyen, The Sunday Times.

'No one knew better than Grossman what people are capable of. These stories and essays are one of the cultural monuments of the 20th century' David Herman, New Statesman.

'The unstinting championing of ordinary human emotion is what strikes hardest in Grossman's style ... Grossman manages to find human simplicity in his characters at the very apex of pain and disaster' Daily Telegraph.

'This collection of short fiction and essays from the remarkable and criminally under-read Soviet writer includes haunting short stories and his excoriating wartime exposé of the Treblinka death camp' Benjamin Evans, Sunday Telegraph.

'Grossman's stories are so affecting partly because they look so unflinchingly at human nature, combining a journalist's eye with a fascination for humanity enduring under near-intolerable circumstances.' Metro.

'The only subject and the only hope is humanity' Brian Morton, Scottish Sunday Herald.

'Grossman deserves a special, if not revered, place as a recorder of some of the worst excesses of the 20th century - indeed, of any century. A casual reader may be lured into thinking this to be a collection of fictional short stories depicting the hardships and privations of Soviet life. But on page 126 comes an abrupt and horrifying awakening ... 'The Hell of Treblinka' ... nothing prepares us for the force of Grossman's description; his detailed, harrowing reconstruction of what happened' Scotsman.

'Grossman's trajectory is clear in his short fiction and essays: early essays explore the ardent patriotism that fired Russia; later ones such as the title story, 'The Road', an allegory of a beaten mule pulling a munitions train that offers a bitter reflection on life, hint at dangerous disillusionment ... The Road is an excellent introduction to Grossman's hauntingly powerful fiction and reportage' James Urquhart, Financial Times.

'This superbly edited compendium of his writing, containing short stories, journalism and letters to his dead mother, allows us to access the nature and success of his enterprise. Through its lucid notes and essays it also serves as a first-class companion to the terrible history of mid-20th-century central Europe.' Jewish Chronicle.

'The collection has humour, pathos, satire and tragedy. Grossman's superlative ability is to relay through sparse writing the fear, anxiety and compassion of those he writes of. This is an utterly absorbing, compassionate and necessary collection and once read will linger and cause true reflection, as the best writing ought.' Journal of the Law Society of Scotland.

'For today's reader, Grossman's work excavates from the Soviet rubble vital artefacts of the bitter, the tragic, the self-sacrificing, the indomitable and, ultimately, the inspiring' Ken Kalfus, International Herald Tribune.

'The mystery of how to improve the human condition continued to fascinate him and is profoundly reflected in Grossman's superb writings - an enduring memorial to the man' Geoffrey Goodman, Tribune.

'From satire to comedy and tragedy this is a fantastic collection translated into English for the first time. Including Stalin's purges and the Holocaust, these short stories and articles are accompanied by introductions that put Grossman's life into context' Daily Express.

'...his vivid dispatches, some newly translated for this superb collection, retain a freshness that only the finest journalism can. The 11 short stories also collected here show a writer of infinite variety, and the bulk of them will enhance his reputation ... his is a powerful voice of conscience' Sunday Times. --Reviews.

'... it has become accepted that Vasily Grossman was one of the giants of 20th Century literature. This anthology of his stories and journalism, brilliantly translated by Robert and Elizabeth Chandler, charts his growing disillusionment with communism as well as his frontline role in the war against the Nazis' Mail on Sunday. --Review.

Vasily Grossman is recognized as one of the outstanding literary figures of the last century, best known for his novel Life and Fate. The short fiction and essays collected here - never before translated into English - amount to a panoramic reflection on Russia's turbulent twentieth century, from Stalin's murderous purges to the Great Patriotic War and the Holocaust. Works of satire, comedy, tragedy and reportage, they demonstrate one by one the bold intelligence, delicate irony and extraordinary vividness for which Grossman has become justly renowned.

The Road - Short Fiction and Articles