Items related to Handsworth Revolution: The Odyssey of a School

Handsworth Revolution: The Odyssey of a School 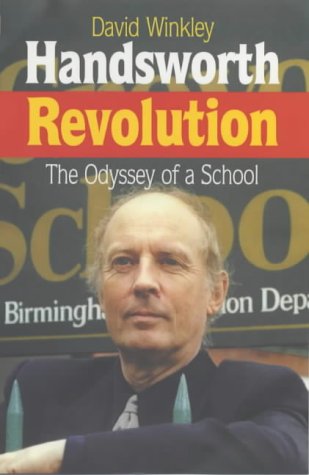 Handsworth Revolution has been widely acclaimed as an important book. It charts the progress of an inner-city primary school over twenty three years, describing and analysing its evolution in the context of a local community at a time of rapid change. It is addictively readable, with a strong narrative drive which takes us on a personal, historical and philosophical journey that is enlivened by a vivid sense of the texture of real school life. It is much more than entertaining. It pauses from time to time to engage in profound and penetrating analysis of issues such as school leadership, the role of teaching and learning, the shifting political influences on education, the problems of social disadvantage, the experience of ethnic minority communities. It also celebrates the powerful impact of teachers and schools on children's lives, and has been enthusiastically received by young teachers and students in training, as well as by headteachers looking for reassurance and support on the question of the value of primary education. It is already being extensively used on teacher-education and leadership and management courses, both within and outside the world of education, sometimes as a set text. It will be of great interest in addition to sociologists, political analysts and local historians. This is a book not to miss. Its exceptionally positive reception from commentators in various fields suggests that it will come to be regarded as a classic of its kind, one of the few portraits of the actual life of teaching that has both become an important text for the academy and at the same time attracted a substantial general readership.

Recent comments from readers and reviewers Professor Tim Brighouse, now commissioner for schools in London, said at the launch of the book in Birmingham, where he was in charge of education, that he would recommend it to everyone in the field of education at every opportunity. John Clare in Telegraph: '...inspirational...' Highly recommended Archbishop of Canterbury: '...Sir David Winkley's vivid and exciting book on the regeneration of a Birmingham primary school...' Professor Richard Hoggart: 'I've read Handworth Revolution with the greatest pleasure. A marvellous read -- highly intelligent, charitable and brave as well as honest.' Frank Robinson, Director, Headstart in the Midlands, Head and Deputy Headteachers Training Programme: 'I'm writing particularly to say how splendid Handsworth Revolution is -- every page peppered with good sound advice for future heads. That's why I've made it one of the set books for our new heads' course. As an account of a remarkable school, I think it's unique.' Professor A.H. Halsey, Professor Emeritus in Social Sciences, University of Oxford: 'I am delighted with Handsworth Revolution and I shall continue to think about it at bedtime for a long time to come...What I like is the way you convey the atmosphere of a school, the problems of children, parents, colleagues. And you give fresh insight to PGCE candidates as to what they have in store...' Dr Ranjit Sondhi, Governor of the BBC, in charge of Education and the English Regions: 'An acutely perceptive, hugely entertaining and deeply humane book. Withering spirits in the world of teaching will be greatly inspired by Handsworth Revolution. Parents everywhere will be reassured; the future of all our children is secure in the hands of philosopher-practitioners like David Winkley.' Professor John MacBeath, Department of Education, University of Cambridge: 'I hesitate to retread the 'unputdownable' cliche but this is one of the few books which I can say, with hand on heart, I had to pursue to the final page. David is a master storyteller but always surprising us with a deep undercurrent of ideas, challenging conventional wisdom about the way it is 'spozed to be'. I think I now have a much firmer grip too on that other overworked term 'leadership', which, in David Winkley's account, fits none of the neat prescriptions that characterize so many tedious texts.' Professor Zoe-Jane Playdon, Kings College, London: 'I liked this book hugely. It's really rare to find someone who can give such a sustained account of one school, from a broadly humanistic viewpoint. It's a real achievement, and a richly textured practitioner account which is as much about national change as about David Winkley's own life.' Professor Roger Woods, Dean of the School of Education, University of Central England: 'I keep dipping into it when I'm supposed to be writing business plans! It's fantastic. Reading about the school, the characters and the accounts of ex-pupils, how schools really work, what the place of schooling is in the long term in people's lives.' Professor Ted Wragg in Times Education Supplement: 'Well written...engaging...a pleasure to read. It shows what miracles can be wrought...a powerful example of someone who refused to bow the knee, and won.' Hilary Wilce in Independent: 'Hurry...and order [this book], that most unlikely thing, an adventure story about education. In fact, order it for anyone -- parent, teacher, student -- interested in children and what helps them grow.' And in her book, How to Help Your Child Succeed at School: 'David Winkley, a wise and gifted former Birmingham school head, whose ground-breaking ideas about children's potential now influence primary schools across the country...' Dr Simon Szreter, Reader in History and Public Policy, University of Cambridge: 'Handsworth Revolution is about the place where reality and dreams meet. Long-term educational success in one of the country's most persistently underprivileged communities really is a story and a half; and one for us all to reflect on.' Chris Arnott in Guardian: 'Sir David Winkley, an Oxford don who became a headteacher...tells in Handsworth Revolution how he took over an inner-city school in that Birmingham suburb in the 1970s and transformed it into one of the most lavishly praised educational institutions in the country...' Robin Strafe in Newbury Weekly News: 'A compelling personal memoir...an abundance of energy, enthusiasm and remarkable vision...' Samantha Welling, Bristol, in Amazon.co.uk: 'As a teacher myself I was hugely impressed by David Winkley's book. The story of his time as a head of an inner-city primary school is by turns moving, comic and tragic. Almost entirely anecdotal and written in a light, engaging style, this book is an essential read for anyone who has been involved in education and will even appeal to those who have not. Highly recommended.' Handsworth Revolution is a set book for the Tavistock Clinic, Oxford Brookes University, University of Central England, and Headstart in the Midlands (Head and Deputy Headteachers Training Programme); and recommended reading for Warwick Business School and University of the West of England, Bristol

Sir David Winkley was head of Grove School, Handsworth, from 1974 to 1997, and was founder of the National Primary Trust in 1987, of which he is currently President. He has been a member of the present Government's educational Standards Task Force, and has served as advisor to several other Department for Education Advisory Committees. He has been a fellow of Nuffield College, Oxford, and since 1999 an honorary professor at the University of Birmingham. Originally a graduate of the University of Cambridge, he has a University of Oxford doctorate in philosophy and honorary doctorates from the Universities of Birmingham and Central England. His books include Diplomats and Detectives: LEA Advisors at Work (1985) and Business Planning for Schools (co-author with R. Puffitt and B. Stoten, 1992), and he has written over 60 articles on various learned subjects.

1. Handsworth Revolution: The Odyssey of a School

2. Handsworth Revolution: The Odyssey of a School

Book Description Condition: New. Details the odyssey of a Birmingham primary school, in a deprived area, which was restored to vitality over two decades by a dedicated headteacher, David Winkley. In this book, he describes the development of a philosophy of education that will cater for the needs of all children. Num Pages: 344 pages. BIC Classification: 1DBKEM; HBT; JFF; JNA; JNK; JNLB. Category: (G) General (US: Trade); (P) Professional & Vocational. Dimension: 215 x 140 x 28. Weight in Grams: 428. . 2002. Paperback. . . . . Seller Inventory # V9781900357210

Book Description Condition: New. Details the odyssey of a Birmingham primary school, in a deprived area, which was restored to vitality over two decades by a dedicated headteacher, David Winkley. In this book, he describes the development of a philosophy of education that will cater for the needs of all children. Num Pages: 344 pages. BIC Classification: 1DBKEM; HBT; JFF; JNA; JNK; JNLB. Category: (G) General (US: Trade); (P) Professional & Vocational. Dimension: 215 x 140 x 28. Weight in Grams: 428. . 2002. Paperback. . . . . Books ship from the US and Ireland. Seller Inventory # V9781900357210

5. Handsworth Revolution: The Odyssey of a School

Book Description Paperback. Condition: New. New copy - Usually dispatched within 4 working days. Details the odyssey of a Birmingham primary school, in a deprived area, which was restored to vitality over two decades by a dedicated headteacher, David Winkley. In this book, he describes the development of a philosophy of education that will cater for the needs of all children. Seller Inventory # B9781900357210

6. Handsworth Revolution: The Odyssey of a School

7. Handsworth Revolution: The Odyssey of a School

8. Handsworth Revolution: The Odyssey of a School