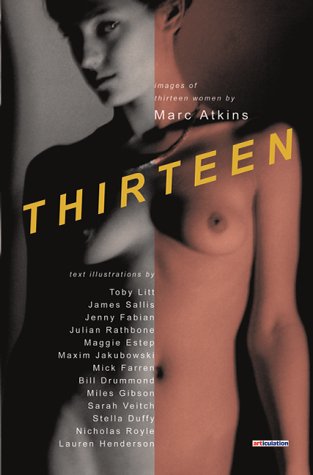 '13' is a unique juxtaposition of imagery: photographic nudes by Marc Atkins 'illustrated' with text specially commissioned from thirteen internationally acclaimed writers. Aside from his celebrated solo work, Atkins is also known for collaborations with the likes of poet and critic Rod Mengham, lexicographer and essayist Jonathon Green and novelist lain Sinclair. The authors 'illustrating' Atkins' photographs in '13' range from twice Booker Prize nominated novelist Julian Rathbone to New York columnist Maggie Estep via Bill Drummond (best known for his part in pop/art unit, KLF) and Groupie author, Jenny Fabian. Some, like Nicholas Royle and Stella Duffy, are rising stars of British literature; others, such as writer and biographer James Sallis and writer/journalist Mick Farren are seasoned veterans. All thirteen were given a nude portrait and asked to write about what they saw. The results are revealing, occasionally disturbing and very often breathtaking - descriptions which also fit Atkins' images perfectly.

More haunting are his odd images, reminiscent of Man Ray's, of the human figure photographed in the intimacy of a curtained room. --Tristian Quinn, New Statesman