Items related to The End of Print: The Grafik Design of David Carson

The End of Print: The Grafik Design of David Carson 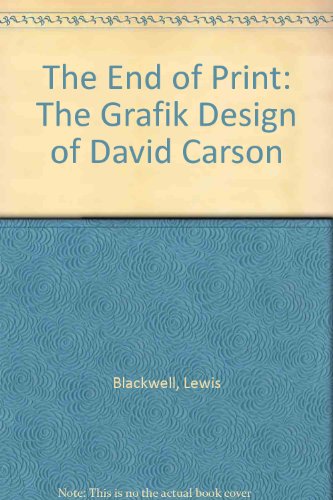 A collection featuring one of the most innovative and controversial of contemporary graphic designers. Carson's career is documented with emphasis on his desire to forge a new aesthetic. This extended edition includes new illustrations and a discussion of the concept of the end of print.

Design for a new brain. Find it and metaprogram yourself -- i-D

Carson is a cult figure capturing the zeitgeist of design. -- The Face

Lewis Blackwell is head of creative direction at Getty Images. Formerly publisher and editor of Creative Review he is the author and editor of numerous critically acclaimed books including David Carson: 2ndsight, with Neville Brody G1, and with Chris Ashworth Soon: The Future of Brands. A regular writer and commentator on graphic design and typography advertising film video and multimedia, Blackwell lectures and chairs awards juries internationally. David Carson has been described as the most influential graphic designer working today. He directs commercials and short films and lectures internationally. Carson was awarded "best use of design and photography" from the International Center for Photography, New York. Newsweek magazine said Carson "changed the face of graphic design." Carson's previous publications include The End of Print: The Graphic Design of David Carson and David Carson: 2ndsight, a winner of the 77th Annual Art Directors Awards.