Items related to Vital Signs: Music, Movies and Other Manias 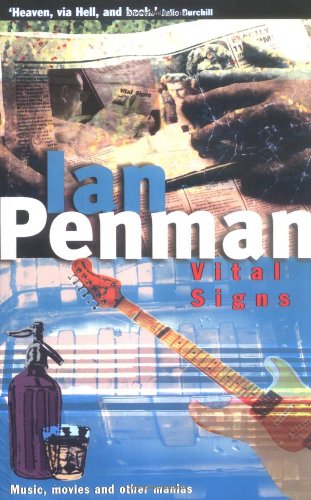 In 1977, The Clash and The Sex Pistols released their d?but albums, Vladimir Nabokov died and Ian Penman had his first review published in the NME. Britain's leading weekly music paper was just about to embark upon its most glamorous era, with Penman its star writer. Perming Barthes with dub, booze and Walter Benjamin, Penman achieved something few music writers can even dream of - he changed the way the subject was written about. From Amis to Zappa, Tricky to De Niro, Fassbinder to Michael Jackson, cartoons to curry, S&M to heavy metal, this brilliant collection brings together for the very first time Ian Penman's journalism.

There's very few things I've wanted but couldn't have, but one I can think of is envy... When I met Penman... I finally found someone of my own generation I could feel this most shimmeringly savage and sexy of emotions for. And it felt DAMN GOOD. Reader, in your hands you hold your very own ticket to Heaven, via Hell, and back (Julie Burchill ?For sheer provocative wit and penetrating insight it makes a mockery of most magazine journalism? Uncut ?Vivid witticisms and circumspect X rays of youth culture? Time Out New York)

Ian Penman was born in 1959. He was raised and educated in Norfolk, Cyprus, Scotland and the Middle East. In 1977, scheduled to atttend art college, he took a 'year out' and fetched up at the NME, where his subsequent work achieved a certain notoriety. Since 1985 he has been a successful freelance journalist, published widely and reprinted in France, Germany, the US and Japan. Mr Penman is the sort of person who will one day leave all his money to a home for stray cats.

Buy Used
Condition: Very Good
374 pages. The cover is a little... Learn more about this copy

Book Description Serpent's Tail, 1998. Paperback. Condition: Very Good. 374 pages. The cover is a little worn and creased. The page edges are well tanned and foxed. Hinge weak on title page. Books listed here are not stored at the shop. Please contact us if you want to pick up a book from Newtown. Seller Inventory # 164212

Book Description Serpent's Tail, 1998. Condition: Good. A+ Customer service! Satisfaction Guaranteed! Book is in Used-Good condition. Pages and cover are clean and intact. Used items may not include supplementary materials such as CDs or access codes. May show signs of minor shelf wear and contain limited notes and highlighting. Seller Inventory # 1852425237-2-4