Items related to Wyrm King (Volume 3) (Beyond the Spiderwick Chronicles) 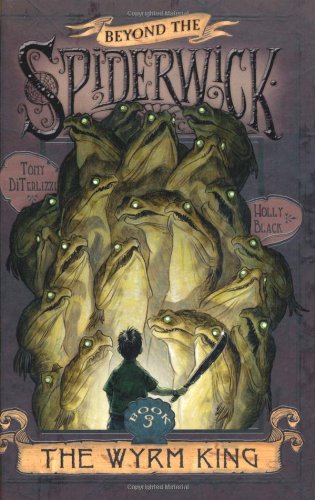 Nick and Laurie thought their giant problems were solved after they lured all the giants into the sea. But now, the Grace kids are back to tell them they may have caused more trouble!

It turns out the giants control the population of Hydra, a dragon like creature that creates sinkholes all over Florida. But with the mermaids refusing to return the giants to the shore, Taloa still demanding their help in looking for her lost sisters and the threat of Florida's destruction drawing closer, the kids have to take matters in their own hands.

Will Nick and Laurie be able to stop the chaos they unwittingly caused? Is the giant hunter Noseeum Jack really as helpful as they thought? Can Arthur Spiderwick's infamous Field Guide help them out of this mess?

Find out in the final instalment of the bestselling series, Beyond the Spiderwick Chronicles!

Holly Black spent her early years in a decaying Victorian mansion where her mother fed her a steady diet of ghost stories and faerie tales. An avid collector of rare folklore volumes, spooky dolls, and crazy hats, she lives in West Long Branch, New Jersey, with her husband, Theo. Together with illustrator Tony DiTerlizzi, she is the creator of the bestselling Spiderwick Chronicles series of children's books.

Tony DiTerlizzi is co-creator of the international bestselling series, The Spiderwick Chronicles. He has illustrated numerous picture books for children, including Ted, G is for 1 Gzonk and the critically acclaimed The Spider and the Fly, which won the Caldecott Honor. Tony lives in Amherst, Massachusetts with his wife, Angela, and their baby daughter, Sophia.

Book Description 2009. Hardcover. Condition: New. Simon & Schuster Children's, 2009. pictorial Hardcover. THIS BOOK IS HIGHLY COLLECTABLE AS IT IS UPSIDE DOWN TO THE COVERS A BRAND NEW BOOK UNUSED. Full refund if not satisfied. 24 hour despatch. If not pictured in this listing, a scan of the actual book is available on request. Seller Inventory # nf2189