Items related to Ten Most Wanted 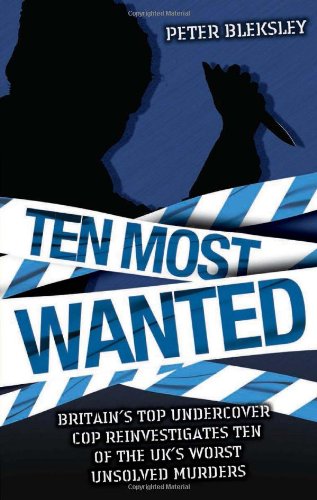 When people talk about getting away with murder, few realise that in reality one in ten murderers do. In this chilling book, bestselling author and former undercover detective Peter Bleksley examines just why so many murders go unsolved. Despite the fact that we are photographed up to 300 times a day whether we commit a crime or not and incredible advances in DNA testing, murder is more common than ever. Using his own considerable investigative powers and his unique access to police resources and contacts he looks at ten unsolved murder cases from the 21st Century to discover where the problems lie and what can be done. His findings whilst disturbing, point to glaring errors that have been made in the way we look at murder and what we can do to stop it.

Peter Bleksley joined the Metropolitan Police in 1978 and his first posting was to Peckham police station in South London. He developed a skill for undercover work whilst working as a detective for Kensington and Chelsea. In 1988 he became a founder member of Scotland Yard's undercover SO10 unit. Since leaving the Police Force he has become a successful author, a consultant to documentary and drama makers and the proud father of two. His success rate in all the murders he was asked to investigate whilst serving as an officer stands at 100 per cent.

Book Description John Blake Publishing Ltd, 2007. Paperback. Condition: Good. Minor shelf wear Good condition is defined as: a copy that has been read but remains in clean condition. All of the pages are intact and the cover is intact and the spine may show signs of wear. The book may have minor markings which are not specifically mentioned. Most items will be dispatched the same or the next working day. Seller Inventory # wbb0015391072

Book Description Blake Publishing, 2007. Paperback. Condition: GOOD. Has little wear to the cover and pages. Contains some markings such as highlighting and writing. Seller Inventory # 1844544060_abe_gd

Book Description Paperback. Condition: Very Good. The book has been read, but is in excellent condition. Pages are intact and not marred by notes or highlighting. The spine remains undamaged. Seller Inventory # GOR001078838