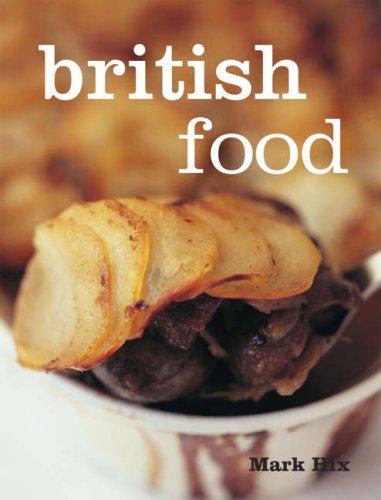 British Food is part of a burgeoning revival and enthusiasm for British cuisine. After exhausting our tastebuds on French, Italian and Asian fare, we are rediscovering our own culinary heritage and realising that British food is something that we can not only be justifiably proud of, but also relish, explore and develop. Mark Hix, is passionate about British food and in this book he gives classic British dishes a fresh modern twist to bring them bang up to date and also creates exciting new dishes with traditional, local ingredients. The first chapter introduces the reader to the best of British ingredients, seasonal availability, and advice on shopping and storage. Recipe chapters focus on Soups; Starters, Snacks and Savouries; Fish and Seafood; Poultry and Game; Meat; Vegetables; Puddings and Baking. From Fish and Chips, Kedgeree and Lancashire Hotpot, to Devils on Horseback, Game Pie and Eton Mess, the book will make every reader excited about cooking British.

For the last 17 years, Mark Hix was the Chef Director of Caprice Holdings Limited, overseeing Le Caprice, The Ivy and J. Sheekey, three of London s most fashionable restaurants. He is about to open Hix Oyster and Chophouse in London s Smithfield market. He is also a celebrated food writer and has received several awards for his regular features in The Independent on Saturday Magazine. Mark has written seven cookbooks, the latest being British Regional Food, which received a Guild of Food Writers Award in 2007 and the Andre Simon Book Award Special Commendation. He is also a winner of BBC s Great British Menu (2007).