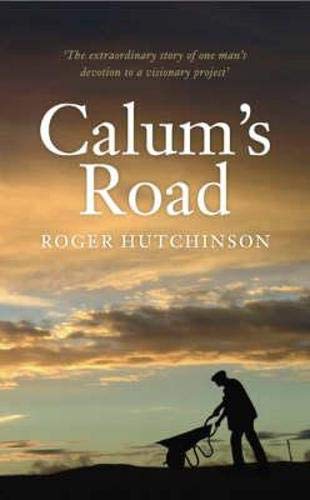 Calum MacLeod had lived on the northern point of Raasay since his birth in 1911. He tended the Rona lighthouse at the very tip of his little archipelago, until semi-automation in 1967 reduced his responsibilities. 'So what he decided to do', says his last neighbour, Donald MacLeod, 'was to build a road out of Arnish in his months off. With a road he hoped new generations of people would return to Arnish and all the north end of Raasay'. And so, at the age of 56, Calum MacLeod, the last man left in northern Raasay, set about single-handedly constructing the 'impossible' road. It would become a romantic, quixotic venture, a kind of sculpture; an obsessive work of art so perfect in every gradient, culvert and supporting wall that its creation occupied almost twenty years of his life. In "Calum's Road", Roger Hutchinson recounts the extraordinary story of this remarkable man's devotion to his visionary project.

"A wonderful, elegant and serious book [which] describes an extraordinary
act of will." -- Daily Telegraph, September 16, 2006

"An extraordinarily fine book ... The story this one tells is as good as
stories get." -- West Highland Free Press, 15 September 2006

"An incredible testament to one man’s determination not to fold against a
far-off bureaucracy." -- Sunday Herald, 27 August 2006