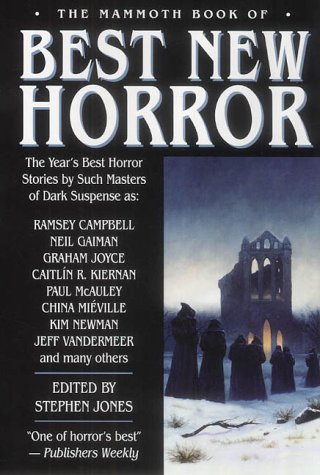 To accompany the very best in short stories and novellas is the year's most comprehensive horror overview and contacts listing as well as a fascinating necrology.

Winner of the 2002 British Fantasy Award for Best Anthology

Stephen Jones is the winner of three World Fantasy Awards, four Horror Writers Association Bram Stoker Awards and three International Horror Guild Awards, as well as being a multiple recipient of the British Fantasy Award and a Hugo Award nominee.

A former television producer/director and genre movie publicist and consultant, he has written and edited more than 130 books, including the Fearie Tales: Stories of the Grimm and Gruesome, A Book of Horrors, Curious Warnings: The Great Ghost Stories of M.R. James, Psycho-Mania! and The Mammoth Book of Best New Horror and Zombie Apocalypse! series.

1. The Mammoth Book of Best New Horror (No.14) Jones, Stephen