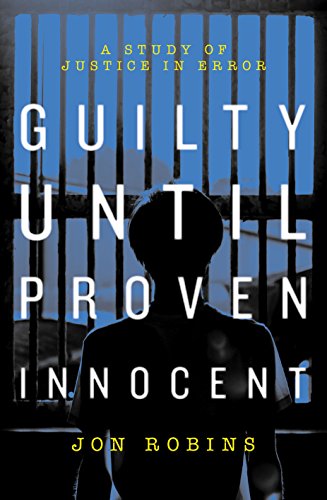 Whenever a miscarriage of justice hits the headlines, it is tempting to dismiss it as an anomaly a minor hiccup in an otherwise healthy judicial system. Yet the cases of injustice that feature in this book reveal that they are not just minor hiccups, but symptoms of a chronic illness plaguing the British legal system.

Massive underfunding, catastrophic failures in policing and shoddy legal representation have all contributed to a deepening crisis one that the watchdog set up for the very purpose of investigating miscarriages of justice has done precious little to remedy. Indeed, little has changed since the bad old days of the Guildford Four and Birmingham Six.

Award winning journalist Jon Robins lifts the lid on Britain s legal scandals and exposes the disturbing complacency that has led to many innocent people being deemed guilty, either in the eyes of the law or in the court of public opinion.

Best books for summer: Jon Robins reminds us of the wrong side of humanity in Guilty Until Proven Innocent, cataloguing the wrongs that lead to miscarriages of justice, compounded by the extreme reluctance of the courts to correct the original error. It is hard to choose the most compelling example, given the depth of research, but the range of cases show that fundamental failures in the criminal justice system are far too common for comfort. --The Times

The Secret Barrister's choice: Guilty Until Proven Innocent by Jon Robins is a no-holds-barred insight into the serious and often overlooked miscarriages of justice that stalk our broken criminal justice system. Journalist and campaigner Robins shines a light on the problems within criminal justice, and incisively exposes how easily and cheaply our founding principles of justice are cast aside. --The Big Issue

The criminal justice system is under unprecedented pressure: police numbers are being slashed, our courts are creaking and legal aid rates for defence lawyers have been frozen for years. It is against this alarming backdrop that we urgently need to talk about the reality of miscarriages of justice. Jon Robins has written a powerful and timely critique of a system in the grips of crisis. --Barry Sheerman MP, chair of the House of Commons All-Party Parliamentary Group on Miscarriages of Justice

An important account of real problems in criminal procedure that have been swept aside for decades.[...] Jon Robins has skillfully interwoven case histories into the modern narrative of problems that exist within the criminal justice system. The strength of Robins s feeling for the subject of miscarriages of justice is clear from the lively and engaging way that this book has been written. Compelling. --Dr Lucy Welsh, New Law Journal

A bleak and often Dystopian picture of British justice... . It's difficult not to be perturbed when seeing just how badly the justice system is failing. --Socialist Lawyer

Jon Robins is a freelance journalist and author. He writes regularly for the Times, the Observer, the Guardian, the Independent, the Financial Times, the Daily Express and Sunday Express. He also runs the Justice Gap (www.thejusticegap.com) an award-winning online magazine aimed at the public about law and justice and the difference between the two . He has won the Bar Council s legal journalist of the year twice and was shortlisted for last year's Criminal Justice Alliance awards

1. Guilty Until Proven Innocent 2018: The Crisis in Our Justice System (Paperback)

Book Description Biteback Publishing, United Kingdom, 2018. Paperback. Condition: New. Language: English. Brand new Book. Whenever a miscarriage of justice case hits the headlines, it is tempting to dismiss it as a shocking aberration. A mistake in a system that otherwise functions in a perfectly satisfactory fashion. This important book shows how the lack of an effective watchdog, failures in policing, poor legal defence in the wake of the legal aid pay freeze, an over-reliance on expert evidence and reluctance in the media to cover miscarriage cases has led to a growing crisis in the criminal justice system. If you think there's a safety net, think again. In 2017, the Criminal Cases Review Commission, the watchdog established to oversee and prevent miscarriages of justice, celebrated its twentieth anniversary. The release of the Birmingham Six in 1991 set in train a series of events: a Royal Commission was launched which ultimately led to major structural reform of the justice system and the creation of an independent body to investigate alleged miscarriages of justice. It didn't fix the problem. Journalist and campaigner Jon Robins explodes the complacency that exists around our criminal justice system by examining a series of shocking cases where there are serious concerns about the safety of each conviction. Seller Inventory # AAJ9781785903694

4. Guilty Until Proven Innocent: The Crisis In Our Justice System

5. Guilty Until Proven Innocent: The Crisis in Our Justice System: 2018