Items related to The Heart of Valour: A Confederation Novel

Tanya Huff The Heart of Valour: A Confederation Novel

The Heart of Valour: A Confederation Novel 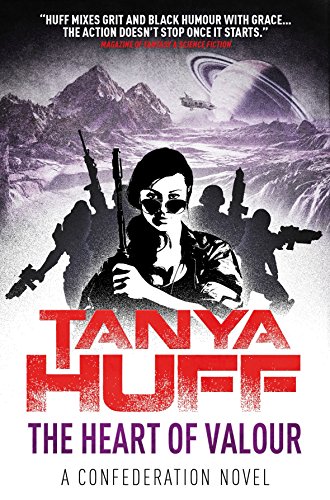 Gunnery Sergeant Torin Kerr is a Confederation Marine's marine. Sidelined since her last mission, she jumped at the chance to go to Crucible - the Marine Corps training planet. While the exercise is underway, the drones begin acting aggressively, without regard to fail-safes or their programming. Kerr finds herself caught in a desperate fight to keep a platoon of Marine recruits alive...

Tanya Sue Huff (born 1957) is a prolific Canadian fantasy author of over 25 novels. Her stories have been published since the late 1980s, including five fantasy series and one science fiction series. One of these, the Blood Books series, featuring detective Vicki Nelson, was adapted for television under the title Blood Ties.

1. The Heart of Valour: A Confederation Novel