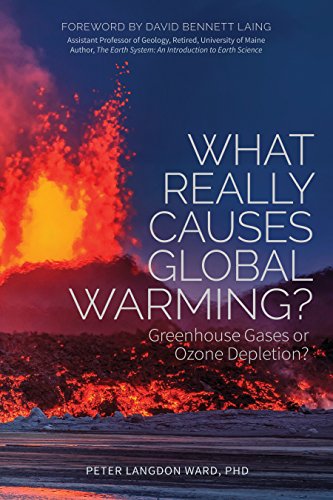 Thousands of scientists are convinced beyond any reasonable doubt that recent global warming is being caused by emissions of greenhouse gases and that we must act immediately to reduce these emissions or else we may render Earth unlivable for our children and our grandchildren. Some even say “the science is settled.”

What Really Causes Global Warming examines a broad range of observations that show that greenhouse warming theory is not only misguided, but not physically possible. Recent warming was caused by ozone depletion due to emissions of human-manufactured gases. We solved that problem with the Montreal Protocol on Substances that Deplete the Ozone Layer stopping the increase in global temperatures by 1998. Volcanoes also deplete ozone. The eruption of Bárðarbunga volcano in central Iceland from August 2014 to February 2015―the largest effusive, basaltic, volcanic eruption since 1783―caused 2015 to be the hottest year on record. How can we adapt?

“The work of science has nothing whatever to do with consensus. Consensus is the business of politics. Science, on the contrary, requires only one investigator who happens to be right, which means that he or she has results that are verifiable by reference to the real world.”―
Michael Crichton, 2003

Dr. Peter Langdon Ward spent twenty-seven years with the United States Geological Survey as a research geophysicist, branch chief, and program manager, and as a specialist in helping people adapt to the risks from natural hazards that they and their families face. He chaired a committee on disaster warning at the White House, published more than fifty scientific papers, and has been featured on Good Morning America and many regional news programs. For the past nine years, he has worked to resolve several enigmatic observations related to climate change.

Climate Is Never “Settled,” and Neither Is Science

“The work of science has nothing whatever to do with consensus. Consensus is the business of politics. Science, on the contrary, requires only one investigator who happens to be right, which means that he or she has results that are verifiable by reference to the real world.” Michael Crichton, 2003

Climate is always changing, usually so slowly that humans can readily adapt, but sometimes so quickly that many people die and civilizations fail for lack of sufficient resources such as water, food, and healthy air. Our species, Homo sapiens, is the child of climate change. At least twenty-five times from 100,000 to 10,000 years ago, every 3600 years on average, the world warmed 18 to 29oF (10 to 16oC) rapidly out of an ice age. Within a decade or two, only part of a human lifetime, temperatures escalated many degrees, glaciers melted and sea level rose, followed by a slow drift back into ice-age conditions over a century or more, over several human lifetimes. Our ancestors proved resourceful. Apparently, they were better able than the Neanderthals and other human-like species to adapt their diet, to migrate, and to learn to work together in order to survive these sudden changes. As more and more data are collected, we are finding a stronger and stronger link between climate change and change among living things throughout geologic history, throughout the evolution of our species, and throughout recorded history. Our ancestors, who were the ones that survived, obviously figured out how to adapt.

Recently, we have been hearing news stories almost daily about global warming or about record-setting severe weather. What is going on and why? Are humans to blame? Will it get worse? What can we do about it? What should we do about it? Finally, there is the very personal question: how should I and my family adapt?

This book starts off by examining the rapid global warming that clearly did occur between 1970 and 1998 and that, in my view, appears to have been caused by humans depleting the ozone layer, located 12 to 19 miles (20 to 30 km) above Earth’s surface. In 1995, Mario J. Molina, Paul J. Crutzen, and Frank Sherwood Rowland received the Nobel Prize in Chemistry for their “work in atmospheric chemistry, particularly concerning the formation and decomposition of ozone.” Rowland, in his acceptance lecture, said “the ozone layer acts as an atmospheric shield, which protects life on Earth against harmful ultraviolet radiation coming from the sun. This shield is fragile: in the past two decades it has become very clear that it can be affected by human activities.” When the ozone layer is thinned (depleted), more ultraviolet radiation than usual reaches Earth, raising surface temperatures.

Global warming by one degree Fahrenheit (0.6oC), between 1965 and 1998, appears to have been caused by a rapid increase in manufacturing of very stable chlorofluorocarbon gases (CFCs) used in aerosol cans, refrigerators, air conditioners, and certain fire extinguishers and used as solvents and foam blowing agents. Mario Molina discovered that when CFCs rise up into the coldest environments of the lower stratosphere, they are broken down by highly energetic, solar ultraviolet radiation, releasing chlorine that depletes ozone, causing the Antarctic ozone hole, major ozone depletion in the Arctic, and more moderate ozone depletion at mid-latitudes.

Chlorine and bromine gases emitted by all types of volcanoes also deplete the ozone layer. Effusive volcanoes pour vast quantities of black, basaltic lava out onto Earth’s surface, as is typical in Hawaii and Iceland, releasing chlorine and bromine that deplete ozone and cause global warming. Explosive volcanic eruptions, on the other hand, such as Mt. Pinatubo in the Philippines in 1991, also deplete ozone, causing winter warming, but in addition, they explode megatons of gases into the stratosphere, just below the ozone layer. These gases, especially water vapor and sulfur dioxide, form aerosols, a fine mist, whose particle sizes grow large enough, over several months, to reflect and scatter sunlight for a few years, overwhelming the warming effect and thus causing net global cooling.

Ozone is expected to remain depleted for many more decades, causing the oceans to continue to warm. The longer ozone remains depleted, the warmer the oceans will become, and the longer Earth’s warmer climate will persist. In fact there is no natural way to cool climate back to pre-1975 levels except as a result of more large, explosive volcanic eruptions.

Ozone concentrations vary rapidly, especially in late winter and early spring, having major effects on weather, on the basic distribution of air-pressure highs and lows, and on the location and strength of each polar vortex and of jet streams.

The greenhouse warming theory of global warming, which most scientists consider “settled,” i.e. proven beyond any reasonable doubt, is not only mistaken ― it is physically impossible. In the first place, greenhouse warming theory says that infrared radiation from Earth warms the planet more than ultraviolet energy from Sun. Common experience confirms that this is not true ― you get hotter standing in sunlight than outside at night with Earth’s infrared radiation welling up around you. Secondly, thermal energy in a colder atmosphere cannot raise the temperature of a warmer planet ― you do not get warmer standing next to a cold stove. Third, radiation from a thermal body cannot warm the same body ― otherwise, all material objects would spontaneously heat up, which they obviously do not.

Greenhouse warming theory builds on observations by John Tyndall in 1859 that carbon dioxide gas absorbs infrared thermal energy radiated by Earth. It seems logical that increased concentrations of carbon dioxide in the atmosphere would increase the thickness of a “blanket” surrounding Earth, keeping Earth warm. Surprisingly, however, there are reasons to question this assumption, as we will discuss in Chapter 4. It has never been proven in the laboratory that increasing the concentration of any greenhouse gas in air actually increases the temperature of the air as much as observed.

Many scientists have pointed out that Earth’s average surface temperature is approximately 60oF (33oC) warmer than a planet should be that is located 93 million miles (150 million kilometers) from Sun. Thus Earth’s atmosphere must be keeping Earth warm. Well, it does that, but not because of greenhouse gases. The stratosphere forms an “electric blanket” in the sense that the energy causing the observed temperature increase with altitude in the stratosphere comes from elsewhere, from Sun, not from the blanketed body, Earth.

Earth is kept warm because all of the atmosphere above the tropopause, 5.6 mi (9 km) above the poles to 11 mi (18 km) above the tropics, absorbs very high energy, very high-frequency, very “hot” ultraviolet radiation from Sun, protecting life on Earth from this DNA-destroying radiation. Radiation does not have temperature, but it carries the potential to heat matter; the higher the frequency of radiation, the higher the temperature becomes in the absorbing matter. When the ozone layer just above the tropopause is depleted (thinned), more high-energy, high-frequency, ultraviolet-B radiation is observed to reach Earth, warming Earth and increasing your risk of sunburn and skin cancer.

In addition, volcanoes are adding to our current problems. The volcano Bárðarbunga in central Iceland, featured on the cover of this book, erupted 33 square miles (85 km2) of black, basaltic magma from August 2014 to February 2015, the largest effusive volcanic eruption in the world since the ten-times more voluminous eruption of Laki in 1783 that killed tens of thousands of people in Europe, possibly triggering the French revolution. The eruption of Bárðarbunga is the most likely cause of recent increases in average global surface temperatures.

Let’s look at the evidence. Are these conclusions “verifiable by reference to the real world”?