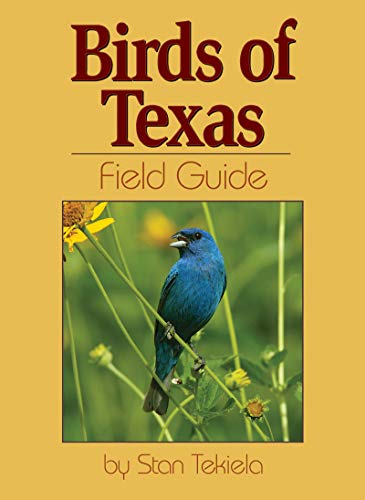 Learn to Identify Birds in Texas!

Make bird watching in Texas even more enjoyable! With Stan Tekiela’s famous field guide, bird identification is simple and informative. There’s no need to look through dozens of photos of birds that don’t live in your area. This book features 170 species of Texas birds, organized by color for ease of use. Do you see a yellow bird and don’t know what it is? Go to the yellow section to find out. Fact-filled information, a compare feature, range maps, and detailed photographs help to ensure that you positively identify the birds that you see.

Naturalist, wildlife photographer and writer Stan Tekiela is the originator of the popular state-specific field guide series. Stan has authored more than 190 educational books, including field guides, quick guides, nature books, children’s books, playing cards and more, presenting many species of animals and plants. With a Bachelor of Science degree in Natural History from the University of Minnesota and as an active professional naturalist for more than 30 years, Stan studies and photographs wildlife throughout the United States and Canada. He has received various national and regional awards for his books and photographs. Also a well-known columnist and radio personality, his syndicated column appears in more than 25 newspapers, and his wildlife programs are broadcast on a number of Midwest radio stations. Stan can be followed on Facebook and Twitter.

Female: buff brown bird with tinges of red on crest and wings, a black mask and large red bill

Male: red bird with a black mask extending from face down to chin and throat, large red bill and crest

Juvenile: same as female, but with a blackish gray bill

Stan’s Notes: A familiar backyard bird. Look for male feeding female during courtship. Male feeds young of first brood by himself while female builds a second nest. Their name comes from the Latin word cardinalis, which means “important.” Very territorial during spring, it will fight its own reflection in a window. Non-territorial in winter, they gather in small flocks of up to 20 birds. Both male and female sing and can be heard any time of year. Listen for their “whata-cheer-cheer-cheer” territorial call in spring.

Book Description Paperback. Condition: New. Paperback. Make bird watching in Texas even more enjoyable! With Stan Tekiela's famous field guide, bird identification is simple and informative. There's no need to look through dozens of photos of .Shipping may be from multiple locations in the US or from the UK, depending on stock availability. 415 pages. 0.408. Seller Inventory # 9781591930457

Book Description PAPERBACK. Condition: New. Book Cover and ISBN may be different from US edition but contents as same US Edition. Excellent Quality,Quick delivery, We may ship the books from Asian regions for inventory purpose. Our courier service is not available at PO BOX. Seller Inventory # nt_9781591930457