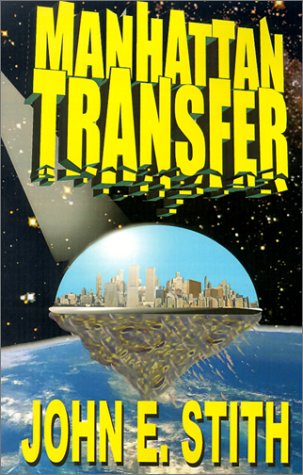 MANHATTAN TRANSFER When aliens abduct New York City, carrying it into space inside a huge dome, the citizens trapped inside must find out why, what they can do to save themselves . . . and to save the dozens of other cities which the aliens have stolen from other planets. A stunning tour-de-force of science fiction storytelling, with gripping action, believable characters, and a plot that will keep you on the edge of your seat! ?Considerable ingenuity . . . Think of it as a visually spectacular movie . . . and a really outstanding, imaginative, and professional production staff and special effects crew working to bring off the big set-pieces and guarantee the thrills.? ?Locus ?Fascinating, intelligent account of people?some ordinary, some extraordinary?struggling to define and confront events that are beyond anything they have dared to imagine. One of the better surprise endings to come down the cosmos in light-years.? ?Chicago Tribune

Aliens kidnap Manhattan.
Vaguely reminiscent of the 1996 film INDEPENDENCE DAY, though first published in 1993. High-tech story of how the residents of Manhattan react when the island is sliced loosed from the Earth and placed aboard an enormous alien ship amidst a collection of alien cities. In development as a major feature film since it was first published. A Hugo Award honorable mention.