Items related to The House of the Dead; or, Prison Life in Siberia :...

Dostoevsky, Fyodor The House of the Dead; or, Prison Life in Siberia : with an introduction by Julius Bramont

The House of the Dead; or, Prison Life in Siberia : with an introduction by Julius Bramont 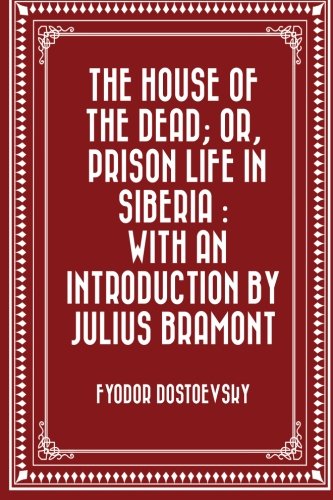 In an age before psychology was a modern scientific field, Fyodor Dostoyevsky (November 11, 1821 – February 9, 1881) was a Russian writer of realist fiction and essays that explored the depths of the human psyche. Known for acclaimed novels Crime and Punishment, The Idiot and The Brothers Karamazov, Dostoyevsky's work discusses the human mind in a world full of political and social upheaval in 19th century Russia, becoming the forerunner of existentialism.
His most famous work was Crime and Punishment, first published in the literary journal The Russian Messenger in twelve monthly installments during 1866. Dostoyevsky wrote the great novel after five years of exile in a labor camp in Siberia, forced there by the Tsar. Crime and Punishment focuses on the mental anguish and moral dilemmas of Rodion Romanovich Raskolnikov, an impoverished ex-student in St. Petersburg who theorizes that he can perform good deeds to counterbalance his crime, justifying his actions by referencing Napoleon Bonaparte. The novel is considered one of the greatest novels ever written.

1. The House of the Dead; or, Prison Life in Siberia : with an introduction by Julius Bramont