Items related to The Middle Way: Faith Grounded in Reason 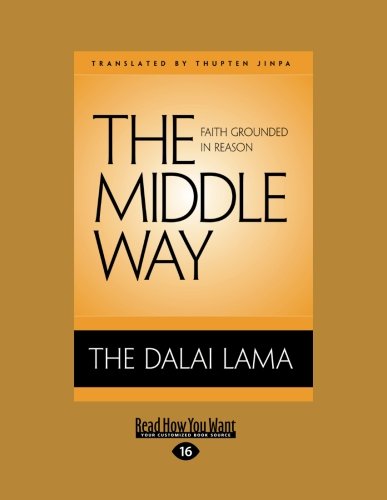 In this luminous presentation, the Dalai Lama lays out the Middle Way - ''the way of the intelligent person'' who approaches all matters, including matters of faith and devotion, with the highest spirit of critical inquiry and does so without falling into the traps of fixed ideas or extreme views. With fresh emphasis, this peerless and beloved teacher links Tibetan Buddhism to its deep roots in the ancient scholastic tradition of Nalanda University and to the profound analytical teachings of the seminal Indian master Nagarjuna. As the Dalai Lama explores in depth Nagarjuna's Fundamental Stanzas on the Middle Way - a text of radical importance to the entirety of the Mahayana Buddhist tradition-he illuminates such subtle and easily misunderstood topics as the nature of self and no-self, dependent origination, and the differing roles of relative and absolute truths. This volume also includes a rich exploration of the Tibetan master Tsongkhapa's Three Principal Aspects of the Path, offering the reader an opportunity to put these matters of deepest philosophical import into direct practice.''It is vital for us to obtain genuine confidence in the nature of mind and reality, grounded in understanding and reason. What we need is a skeptical curiosity and constant inquiry, a curious mind, drawn toward all possibilities; and when we cultivate that, the desire to deeply investigate naturally arises.'' - The Dalai Lama, in The Middle Way

"The Dalai Lama can write both broadly accessible and esoteric books on Buddhism; this one is, not surprisingly, right in the middle."--Publishers Weekly

"How fortunate we are to have access to these brilliant teachings given by the Dalai Lama in Toronto in 2004 and now impeccably translated by his principal English translator, Thubten Jinpa. The first half of the book presents the Buddhist path to enlightenment a la Nagarjuna. The second half shows how to put the key elements into practice, and it is here that His Holiness offers a beautiful explanation of Lama Tsongkhapa's Three Principal Aspects of the Path - true renunciation, the altruistic wakening mind and the correct view of emptiness. A truly inspiring book."--Mandala

Tenzin Gyatso, the Fourteenth Dalai Lama, is the spiritual leader of the Tibetan people. He frequently describes himself as a simple Buddhist monk. Born in northeastern Tibet in 1935, he was as a toddler recognized as the incarnation of the Thirteenth Dalai Lama and brought to Tibet's capital, Lhasa. In 1950, Mao Zedong's Communist forces made their first incursions into eastern Tibet, shortly after which the young Dalai Lama assumed the political leadership of his country. He passed his scholastic examinations with honors at the Great Prayer Festival in Lhasa in 1959, the same year Chinese forces occupied the city, forcing His Holiness to escape to India. There he set up the Tibetan government-in-exile in Dharamsala, working to secure the welfare of the more than 100,000 Tibetan exiles and prevent the destruction of Tibetan culture. In his capacity as a spiritual and political leader, he has traveled to more than sixty-two countries on six continents and met with presidents, popes, and leading scientists to foster dialogue and create a better world. In recognition of his tireless work for the nonviolent liberation of Tibet, the Dalai Lama was awarded the Nobel Peace Prize in 1989. In 2012, he relinquished political authority in his exile government and turned it over to democratically elected representatives.

His Holiness frequently states that his life is guided by three major commitments: the promotion of basic human values or secular ethics in the interest of human happiness, the fostering of interreligious harmony, and securing the welfare of the Tibetan people, focusing on the survival of their identity, culture, and religion. As a superior scholar trained in the classical texts of the Nalanda tradition of Indian Buddhism, he is able to distill the central tenets of Buddhist philosophy in clear and inspiring language, his gift for pedagogy imbued with his infectious joy. Connecting scientists with Buddhist scholars, he helps unite contemplative and modern modes of investigation, bringing ancient tools and insights to bear on the acute problems facing the contemporary world. His efforts to foster dialogue among leaders of the world's faiths envision a future where people of different beliefs can share the planet in harmony. Wisdom Publications is proud to be the premier publisher of the Dalai Lama's more serious and in-depth works. Thupten Jinpa Langri was educated in the classical Tibetan monastic academia and received the highest academic degree of Geshe Lharam (equivalent to a doctorate in divinity). Jinpa also holds a BA in philosophy and a PhD in religious studies, both from the University of Cambridge, England. Since 1985, he has been the principal translator to the Dalai Lama, accompanying him to the United States, Canada, and Europe. He has translated and edited many books by the Dalai Lama, including The World of Tibetan Buddhism, Essence of the Heart Sutra, and the New York Times bestseller Ethics for the New Millennium. Jinpa has published scholarly articles on various aspects of Tibetan culture, Buddhism, and philosophy, and books such as Songs of Spiritual Experience: Tibetan Poems of Awakening and Insight (co-authored) and Self, Reality and Reason in Tibetan Thought. He serves on the advisory board of numerous educational and cultural organizations in North America, Europe, and India. He is currently the president and the editor-in-chief of the Institute of Tibetan Classics, a nonprofit educational organization dedicated to translating key Tibetan classics into contemporary languages. He also currently chairs the Mind and Life Institute.