Items related to Cotteridge Through Time 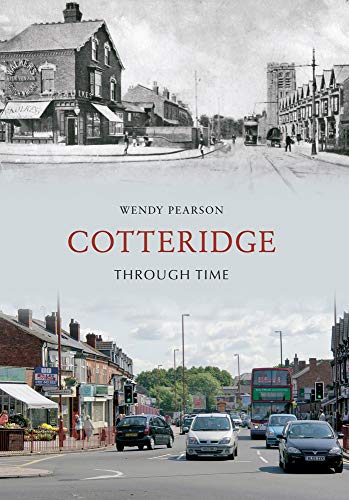 Located at the end of the Northfield to Sedgley ridge Cotteridge had some significant early settlements at Middleton Hall, Rowheath, Breedon Cross and Lifford. Cotteridge was in Worcestershire until the Local Authorities Order of 1911 transferred much of the ancient parish of King's Norton into Warwickshire as part of the Greater Birmingham Scheme. This fine selection of images captures these changes.Paper making, chemical works, and metal industries grew up along the canals and were served by many wharfs. Not many villages can boast having four railway stations! Cotteridge was made into a thriving local centre by the surrounding industry and transport network. The park holds an annual festival of music, arts, and dance. Cotteridge is a busy communication centre with a thriving community spirit.

Wendy Pearson has spent most of her life in Birmingham or the Black Country. One of her main interests is photography and had become a Licentiate of the Royal Photographic Society in 1997. She is currently a member of English Heritage, and worked for some years as a guide for the National Trust. She currently runs two afternoon local history groups for people who are reluctant to go out during the dark winter evenings but who wish to discuss and explore the history of their neighbourhood.

Book Description Amberley Publishing. Paperback / softback. Condition: New. New copy - Usually dispatched within 4 working days. This fascinating selection of photographs traces some of the many ways in which Cotteridge has changed and developed over the last century. Seller Inventory # B9781445602387