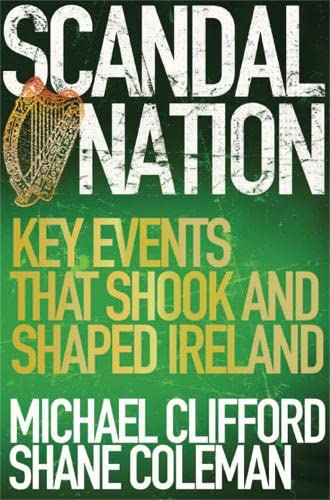 For Bertie Ahern and the Drumcondra Mafia (2009)

Fast-paced and tightly written . . . . Surveys show us to be appalled or enthralled with politics, and if you fit under either of these headings, this is for you. (Sunday Tribune)

[The authors] have peered into the mist that surrounds the financial affairs of "The Bert" and come up with a very lucid and entertaining account of the story so far. (Irish Times)

This is not just the story of the Drumcondra mafia; it is also a very readable account of Bertie's travails at the Mahon Tribunal and of his attempts to spin the story to the public. (Sunday Times)

"Follow the money!" was the watchword of the underground car-park source, "Deep Throat", as he guided Washington Post reporters Carl Bernstein and Bob Woodward through the intricacies of the Watergate affair. This is exactly what Clifford and Coleman do, as they lead us through the bewildering saga of alleged "dig-outs", curious foreign-currency transactions, parcels of cash in strange locations and other bizarre financial arrangements that make up the weird and wonderful world of Ahern and his money. (Irish Times)

Michael Clifford is a journalist with the Sunday Tribune where he writes a weekly column. He regularly contributes to a variety of programmes on Irish radio and TV. He is author of Love You to Death: Ireland's Wife Killers Revealed.

Shane Coleman is the Political Editor of the Sunday Tribune and is a regular analyst of Irish politics on television and radio. He is the best selling author of Foot in Mouth: Famous Irish Political Gaffes and Up the Poll: Great Irish Election Stories.
Bertie Ahern and the Drumcondra Mafia was their first joint publication.

Book Description Hachette Books Ireland, 2010. Paperback. Condition: Used; Good. **Simply Brit** Shipped with Premium postal service within 24 hours from the UK with impressive delivery time. We have dispatched from our book depository; items of good condition to over ten million satisfied customers worldwide. We are committed to providing you with reliable and efficient service at all times. Seller Inventory # 1477956

Book Description Paperback. Condition: Very Good. The book has been read, but is in excellent condition. Pages are intact and not marred by notes or highlighting. The spine remains undamaged. Seller Inventory # GOR002528633

Book Description Hachette Books Ireland, 2010. Paperback. Condition: Good. MAY OR MAY NOT HAVE A DUST JACKET Usual signs of a well read book but good overall condition. May not look good on your bookcase after reading and probably not suitable as a present unless hard to find elsewhere MOST IMAGES ARE STOCK PHOTOS. IF YOU NEED A PARTICULAR EDITION PLEASE SEND US A MESSAGE BEFORE PURCHASING SO THAT WE CAN CHECK THAT THE ONE ON OFFER IS THE ONE YOU REQUIRE. SECURE DAILY POSTING FROM UK. 30 DAY GUARANTEE. Seller Inventory # mon0002652818