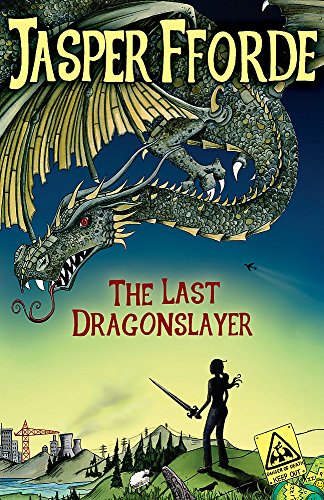 In the good old days, magic was powerful, unregulated by government, and even the largest spell could be woven without filling in magic release form B1-7g.

Then the magic started fading away.

Fifteen-year-old Jennifer Strange runs Kazam!, an employment agency for soothsayers and sorcerers. But work is drying up. Drain cleaner is cheaper than a spell, and even magic carpets are reduced to pizza delivery.

So it's a surprise when the visions start. Not only do they predict the death of the Last Dragon at the hands of a dragonslayer, they also point to Jennifer, and say something is coming. Big Magic . . .

'Fforde is a master entertainer, and a wordsmith of dexterous genius' (Scotsman)

'Fforde's books are more than an ingenious idea. They are written with buoyant zest and are tautly plotted. They have empathic heroes and heroines who nearly make terrible mistakes and suitable dastardly villains who do. They also have more twists and turns than Christie, and are embellished with the rich details of a Dickens or Pratchett.' (Independent)

'Fans of the late Douglas Adams, or, even, Monty Python, will feel at home with Fforde.' (Herald)

'This is a book for the adventure lover, with an evil conglomerate and action mixed in equal measure with believable fantasy. There is also, happily, lots of word play.' (Courier Mail)

COMING TO YOUR TV ON SKY1 THIS CHRISTMAS
Jasper Fforde's first work for a younger generation of readers: hilarious, offbeat and bewitching, this is the start of a Dragonslayer trilogy

Book Description Hodder & Stoughton General Division. Paperback. Condition: GOOD. Spine creases, wear to binding and pages from reading. May contain limited notes, underlining or highlighting that does affect the text. Possible ex library copy, thatÔ ll have the markings and stickers associated from the library. Accessories such as CD, codes, toys, may not be included. Seller Inventory # 3092673777

Book Description Paperback. Condition: Very Good. The book has been read, but is in excellent condition. Pages are intact and not marred by notes or highlighting. The spine remains undamaged. Seller Inventory # GOR003126417

Book Description Hodder & Stoughton 2010-11-04, 2010. Paperback. Condition: Very Good. All books are pre-owned and will have been read by someone else before you. They may well show signs of minor wear and tear. Please note, cover images are illustrative only, and the actual book cover and edition can vary. Seller Inventory # 9781444707182-21

Book Description Hodder & Stoughton General Division. Condition: Good. A+ Customer service! Satisfaction Guaranteed! Book is in Used-Good condition. Pages and cover are clean and intact. Used items may not include supplementary materials such as CDs or access codes. May show signs of minor shelf wear and contain limited notes and highlighting. Seller Inventory # 1444707183-2-4