Items related to Iliad & The Odyssey, The (Barnes & Noble Leatherboun... 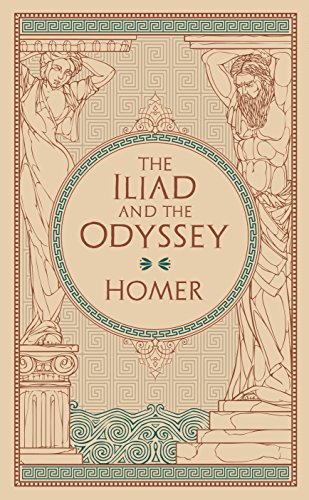 Homer's two epics of the ancient world, The Iliad & The Odyssey, tell stories as riveting today as when they were written between the eighth and ninth century B.C. The Iliad, which tells of the siege of Troy by the Greeks, is an unforgettable tale of nations at war and of the courage and compassion heroic soldiers show upon the field of battle. The Odyssey is the story of the Greek hero Odysseus and the many marvels and challenges he encounters during his ten-year voyage home to Ithaca after the end of the Trojan War. This edition employs Samuel Butler's classic translations of both texts.

Ancient Greek poet Homer established the gold standard for heroic quests and sweeping journeys with his pair of classic epic poems, although very little is known about him. He has fascinated scholars for centuries and there is much disagreement about where he was from and when The Odyssey and The Iliad were written. There is no doubt, however, that these two poems form one of the foundations of Western literature.

2. The Iliad and The Odyssey

3. The Iliad and The Odyssey

4. The Iliad and The Odyssey