Items related to Mr. Currier and Mr. Ives: A Note on Their Lives and...

Crouse, Russell Mr. Currier and Mr. Ives: A Note on Their Lives and Times

Mr. Currier and Mr. Ives: A Note on Their Lives and Times 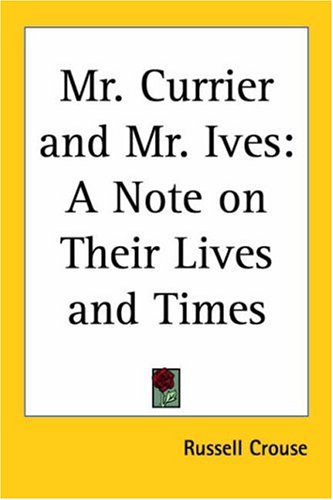 1930. With 32 illustrations. The story of Currier and Ives, a firm of American lithographers, whose prints captured life in the 19th century. The firm developed from the business founded in New York City by Nathaniel Currier. Currier's first successful print depicted destruction from a fire that destroyed a large part of lower Manhattan. This lithograph was followed by the series, now known as Currier and Ives prints, devoted to contemporary subjects that ranged from the familiar to the sensational: scenes of social and domestic life, public disasters, and raids by Native Americans. Currier promoted to partnership in the firm the artist James Merritt Ives, whom he had employed as a bookkeeper, and after which the prints published by the firm bore the dual trademark.