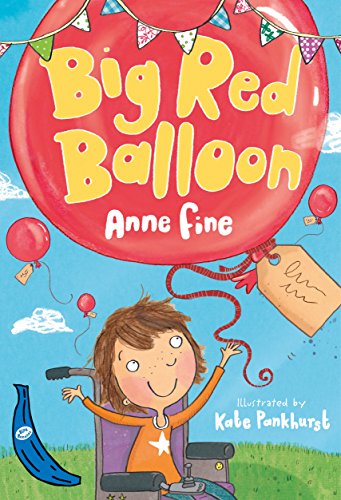 Pip’s class are sending big red helium balloons off to celebrate their school’s 100th anniversary. They ask the people who find them to tell them how far they’d gone. One lands just down the road, one is found in the next town – but Pip’s flies all the way to Buckingham Palace! And Pip gets an invitation to have tea with the Queen . . .

Blue bananas are illustrated books for NC Level 2 readers learning to tackle longer prose for the first time with the support of extensive illustrations and speech bubbles. They are carefully designed with education in mind, supporting children’s understanding of vocabulary and punctuation. Blue Bananas explore the feelings and emotions of characters in a clear fashion.

A great favourite for discussions in reading groups, Anne Fine's work has been published in over forty-five languages. Despite this, she remains best known in her home country, Britain, as a writer principally for children. She has twice won both the Carnegie Medal and the Whitbread Awards, the Guardian Children's Book Prize and numerous other prizes and awards. She was the second Children's Laureate from 2001-3, is a Fellow of the Royal Society of Literature, and was awarded an OBE for services to children's literature.

Anne Fine is an entertaining and engaging speaker on the subject of books and reading, and is in demand the world over for her tireless enthusiasm, common sense approach to literacy, and for the deliciously wicked humour that permeates all her writing. Find out more about Anne's dual lives at www.annefine.co.uk

Kate Pankhurst has an MA in Children’s Book Illustration. She has illustrated books by Judy Blume, Ian Whybrow, Steve Hartley and Marjorie Newman. She lives in Leeds with her partner and two rabbits.

Series consultant Nikki Gamble is the director of Just Imagine, a specialist resource and training centre for Primary English. She is Associate Consultant at the University of London, Institute of Education.

Anne Fine Anne Fine is one of the UK's best-loved authors. She was the Children's Laureate from 2001-2003. She has won the Carnegie Medal twice – in 1989 and 1992 – and the Whitbread Award twice – in 1993 and 1996. She has published over 50 books for children including favourites such as Ivan the Terrible, The Angel of Nitshill Road and How to Write Really Badly. When she was young, it never occurred to Anne Fine that she might be a writer. She thought books were born on the library shelves. But Anne was good at writing stories, and she had a good deal of practice. In 1971 Anne's first daughter was born. Unable to get to the library in a snowstorm to change her library books, in desperation she sat down and started to write a novel. Clearly this was the right job for her, for she has never stopped writing for more than a few weeks since. Kate Pankhurst Kate Pankhurst has an MA in Children’s Book Illustration. She has illustrated books by Judy Blume, Ian Whybrow, Steve Hartley and Marjorie Newman. She lives in Leeds with her partner and two rabbits.