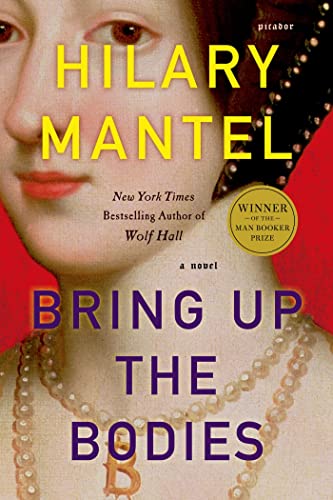 WINNER OF THE 2012 MAN BOOKER PRIZE

The sequel to Wolf Hall, Hilary Mantel's 2009 Man Booker Prize winner and New York Times bestseller, Bring Up the Bodies delves into the heart of Tudor history with the downfall of Anne Boleyn.

Though he battled for seven years to marry her, Henry is disenchanted with Anne Boleyn. She has failed to give him a son and her sharp intelligence and audacious will alienate his old friends and the noble families of England. When the discarded Katherine dies in exile from the court, Anne stands starkly exposed, the focus of gossip and malice.

At a word from Henry, Thomas Cromwell is ready to bring her down. Over three terrifying weeks, Anne is ensnared in a web of conspiracy, while the demure Jane Seymour stands waiting her turn for the poisoned wedding ring. But Anne and her powerful family will not yield without a ferocious struggle. Hilary Mantel's Bring Up the Bodies follows the dramatic trial of the queen and her suitors for adultery and treason. To defeat the Boleyns, Cromwell must ally with his natural enemies, the papist aristocracy. What price will he pay for Anne's head?

"Mantel knows what to select, how to make her scenes vivid, how to kindle her characters. She seems almost incapable of abstraction or fraudulence; she instinctively grabs for the reachably real...In short, this novelist has the maddeningly unteachable gift of being interesting." --The New Yorker

"[Bring Up the Bodies] is astringent and purifying, stripping away the cobwebs and varnish of history, the antique formulations and brocaded sentimentality of costume drama novels, so that the English past comes to seem like something vivid, strange and brand new." --The New York Times Book Review

"Two years ago something astonishingly fair happened in the world of prestigious prizes: the Man Booker Prize and the National Book Critics Circle Award for fiction for 2009 both went to the right winner. The book was Hilary Mantel's Wolf Hall, and it would have dwarfed the competition any year...It was a hard act to follow. But the follow-up is equally sublime...That ironic ending will be no cliffhanger for anyone even remotely familiar with Henry VIII's trail of carnage. But in Bring Up the Bodies it works as one. The wonder of Ms. Mantel's retelling is that she makes these events fresh and terrifying all over again." --The New York Times

"Bring Up the Bodies isn't just her boldest book; it's also her best -- and it reaffirms Mantel's reputation as one of England's greatest living novelists." --NPR

"Hilary Mantel made waves in 2009 with her Man Booker Prize-winning page-turner, Wolf Hall...The second in her planned trilogy, Bring Up the Bodies stalks Anne Boleyn and the soap-opera worthy machinations of Cromwell and his evil allies to bring down the powerful wife of the king. Who knew history could be so sexy?" --Vanity Fair

"What's being called the Wolf Hall Trilogy is a remarkable work in progress, a series that makes the past feel immediate and--this is the best part--unpredictable. Even if you know the history, you'll find yourself racing through these pages to find out what happens next." --People

"After pulling off this literary feat twice, you realize the smartest person in the room isn't Cromwell after all--it's Mantel." --The Huffington Post

"the finest works of historical fiction in contemporary literature." --The Washington Post

"Fans of Wolf Hall will relish this book, but Bring Up the Bodies also stands alone...Her characters are real and vivid people who bring to life the clash of ideals that gripped England at the time. She makes the past present and vital." --The Economist

"Bring Up the Bodies stands magnificently on its own...such is [Mantel's] skill" --LA Times

"You won't be able to tear your eyes away." --The Seattle Times

"The worst that can be said about Mantel--her latest book makes you angry, because you want more." --Slate

"In Mantel's hands, Cromwell's cunning, morally complicated orchestration of that historic slice through the royal neck is as exciting as any thriller." --Entertainment Weekly

HILARY MANTEL is the bestselling author of ten previous novels, including Wolf Hall, which sold more than 200,000 copies and won the 2009 Man Booker Prize. Her previous works include her novel, A Place of Greater Safety, and her memoir, Giving Up the Ghost. She lives in England with her husband.

4. Bring Up the Bodies Format: Paperback

6. Bring Up the Bodies